Last year for my 30th birthday present I went on a trip America! I have always dreamed of going to New York and it really was as amazing as I thought. We spent a week there, sight seeing, eating and walking, so much walking. One of the places at the top of my list was to visit Chloe Coscarelli’s restaurant By Chloe. I have been a fan of hers for a long time and own all three of her books that I cook from regularly.

Chloe Coscarelli first shot to fame when she won a culinary competition with her vegan cupcake on the Food Network’s reality series Cupcake Wars, back in 2010. Since then she has published three vegan cookbooks: Chloe’s Kitchen (2012); Chloe’s Vegan Desserts(2013) & Chloe’s Vegan Italian Kitchen (2014). In 2015 she opened her first restaurant, by CHLOE, in New York City. She currently has three locations in New York, one in Los Angeles and is set to roll out more locations in New York and Boston.

I can’t remember exactly how I came across her first book, but I fell in love with the easy to prepare delicious plant-based recipes. Not long after I purchased her dessert book, which I regularly use when entertaining friends. It was a dream come true when she brought out her vegan Italian cookbook. Coming from an Italian background myself I really loved the veganised versions of classic Italian dishes as well as some more inventive recipes using Italian ingredients.

While in New York we visited By Chloe in the West Village on Bleeker Street. This street has so many amazing restaurants, but one of the busiest by far was By Chloe. We arrived for a late afternoon lunch and there was a line to the door. This line didn’t get shorter the entire duration of our visit. We were lucky enough to grab a table in the limited dining room and enjoy the hustle and bustle of this busy little restaurant. The menu includes a range of burgers, salads, pasta, fries, juices, ice creams, and desserts.

We ordered the Classic and Guac Burger, Sweet potato fries and the Kale Caesar Salad. They were all really delicious. The Guac was a little better than the Classic, as I think it was put together in a rush. However, with the addition of the free dipping sauces (yes free!) it was saved. I think incredibly delicious dipping sauces were Chipotle Mayo and Beetroot Ketchup. The salad again was perfection. It had smoky shiitake mushrooms, crunchy croutons, a well-balanced dressing and ‘parmesan’ crumbs. 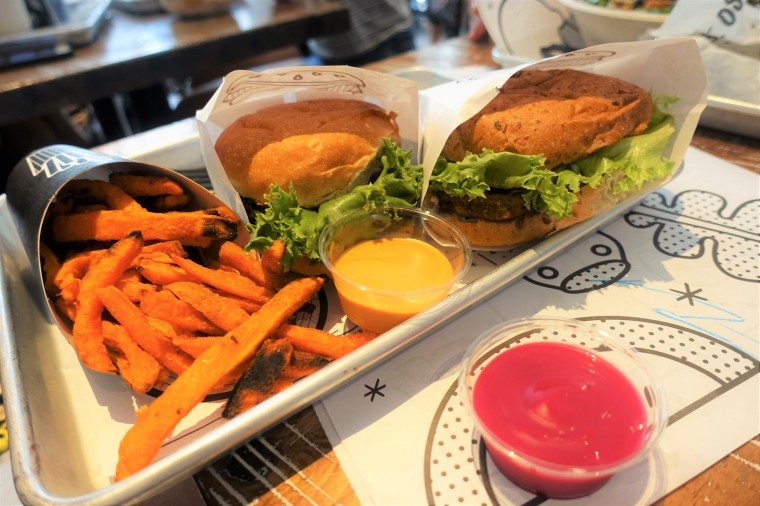 After that, we went back for desserts. There was a big selection, I wish I could have tried one of each. We got the Chocolate Chip Cookie, Raspberry Cupcake, Cloiser Chloe Cupcake and Kale Cookies & Cream Ice cream. They all tasted as good as they looked. The ice cream was also a nice surprise. I didn’t know what to expect but it didn’t really taste like kale. 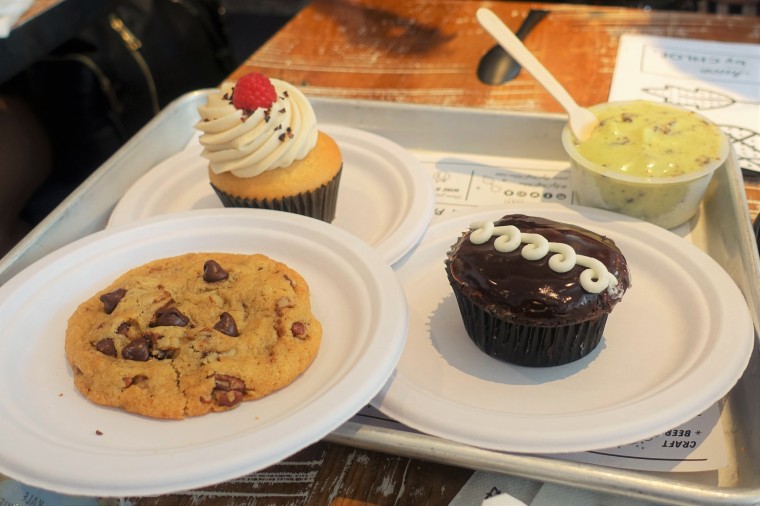 If you get the chance I really recommend you stop in at By Chloe. Like my partner, if you not vegan I still think you will enjoy it. If you are vegan, vegetarian or a health conscious eater you will definitely really love the abundance to healthy delicious food. By Chloe is not only 100% vegan but it is also 100% GMO free and uses organic, seasonal, and locally sourced ingredients.

3 thoughts on “By Chef Chloe”