When I travel I try to find colouring books that are unique to that country. Sometimes I  don’t have any luck, however, while I was in Singapore I came across a quirky book that represents this country very well. Colouring The Lion City: A Sophisticated Activity is illustrated by the Singaporean artist William Sim.

This colouring book is full of whimsical line drawings of Singapore, portraying popular places, cultural icons, and everyday life of this island metropolis. William uses his unique style and imagination to bring these drawings to life. Each drawing features a little robot man and his cat. Some drawings include mechanical flying fish ships and others depict futurist machines fused with iconic landmarks. I imagine that the little robot man is travelling around Singapore and enjoying the sites. I also assume that the futuristic machines represent the unique combination of technology and natural beauty that Singapore has to offer.

The author and illustrator, William Sim, is known for his distinctive drawings, paintings and sculpture. His paintings are dreamscapes that explore the unique blend of nature verse mechanical objects. He artwork has been displayed and several exhibitions. One of the most recent was the Happiness Private Limited 2017: Memory Houses. You can also see his artwork on his Facebook page.

This colouring book is about A4 in size and has a soft cover displaying one of the images and gold foiling for the title. There are 96 line drawings to colour in the book that are all one-sided, so its idea other mediums such as watercolour and markers, that may bleed through. All the pages are fixed to the book, so you can’t remove any of the images unless you are very careful. The paper is high quality thick bright white, very smooth and has a bit of a shine. The selection of images really is quite a variety of landmarks and natural scenes and other manmade structures. As far as I know, all of these images are unique to this colouring book, as I didn’t come across the exact same image when looking up the artist’s other artwork.

I actually really like this book. The imagery is very different to any other books that I have and perhaps the closest book that it reminds me is Lizzie Mary Cullen’s The Magical City. So if you love colouring with Inktense and watercolour in that book, I’m sure you will appreciate this book as well.  I love that the pages in this book are one-sided, as I often get a little worried about using watercolour mediums in my books. I found that that the pages didn’t buckle much at all, so I think it is ideal for this usage. I only have a couple of cons for this book. I would have loved to have the names of the places and landmarks in this book written on the page somewhere. Although my visit to Singapore is still fresh in my mind I was not able to tell exactly where all of these images were representing. I also found the paper had a shiny quality, which was a little annoying at times when using pencils. Perhaps this is because I am a harder handed colourist, and I had to be careful that I didn’t leave the images looking a little streaky. You can probably see from the images that I coloured with pencils that I did struggle with this.

The images below have been listed in the order in which I coloured them. I chose images that were quite different from each other and used different mediums for each to see how they reacted on the paper.

This picture is the only one in the book that had people in it. I thought it would a great simple one to make a start within this book. I used Faber-Castell Polychromos pencils, white Prismacolor Premier pencil to blend and a white Posca pen.

If you don’t recognise the fruit, it is a durian fruit. The famously delicious and extremely smelly fruit. I have never had a chance to try this fruit. To be honest I was a little scared to buy some much of it in case I didn’t like it. I don’t think the smell is that bad as people say though. I tried to give the durians a few differences in colours so that they weren’t all the same. I imaged that the woman’s ethnicity was Chinese and the man was Malay and tried to give them the correct skin colours.  The fish ship was also very fun to colour, though I’m not sure I’m great at colouring metal. I had a little trouble with the background. I found the Polychromos pencils a little hard to blend, but I tried my best with my white Prismacolor to give a smoother finish. It didn’t turn out perfect but I kinda like that its a bit streaky for the texture of the background. Overall I’m happy with this one.

The next image was of a scene of the landmark Clarke Quay. Since this place is best visited at night I went with a night scene. I used Prismacolor Premier pencils, black Faber-Castell Pitt Pen and white Posca pen.

I tried to use images of real evening scenes of Clarke Quay as a reference for this picture. Some elements in the picture were more artistic than realistic, so I just went with a rainbow of colours. I did have a little issue with my Prismacolor pencils on this paper. I had to use a few layers of these pencils to cover the paper and it just kept coming out very streaky. I believe this is because the paper has a shine to it. I also had trouble getting an even look with the black Pitt pen, although that may be because I didn’t put any black pencil underneath. I’m not in love with this one, as it took me far to many days and too happy with how it I coloured it.

The next picture is the Raffles Hotel, with a lot of natural elements and perhaps a little flooding. I used Derwent Inktense pencils, a couple Faber-Castell Albrecht Dürer pencils, an Aquash water pen and a white Posca pen. I hadn’t used my Inktense pencils for a long time, so I’m not sure I had the best technique for this picture. However, I was very happy with the paper with these water mediums. It had very little shrinkage and buckling. The only place that did buckle a little was the sky, where I just flooded it with water. I did press the box for a couple of days with heavy books and I found the paper was able to go flat again. 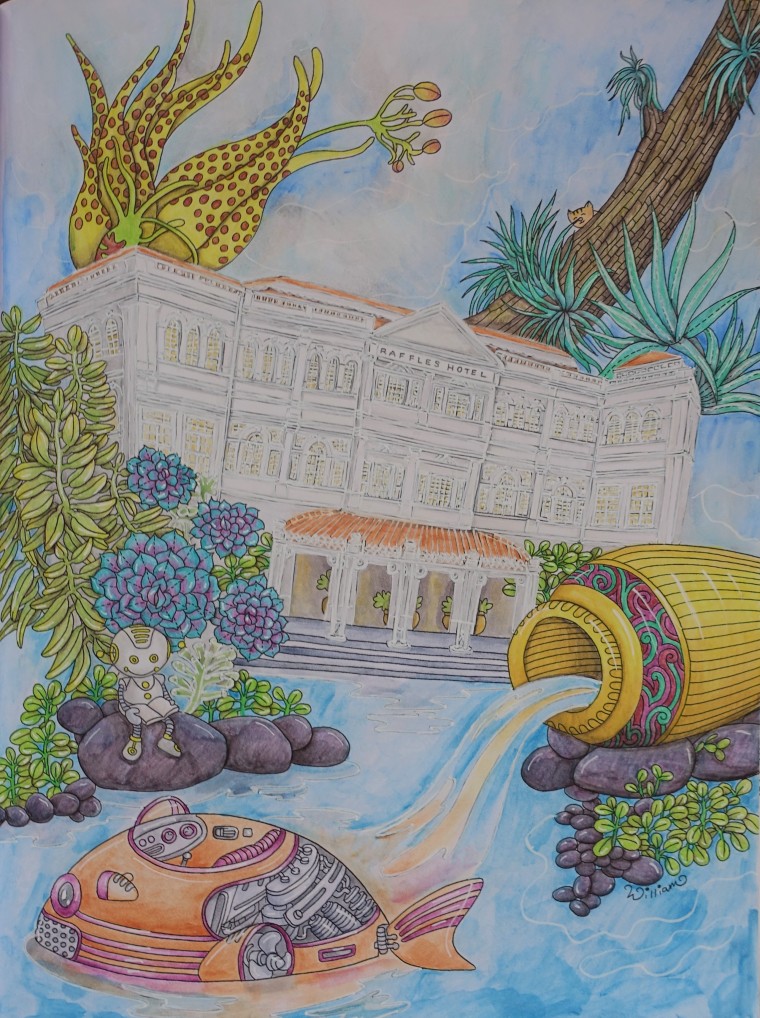 This image is from the title page. I used Derwent Inktense pencils, a few Faber-Castell Albrecht Dürer pencils, a Aquash water pen and a white Posca pen again. I did have a little trouble getting depth in this one. I think perhaps I need to practise a little more with these pencils. It was a nice and quick one though and I really like the image. 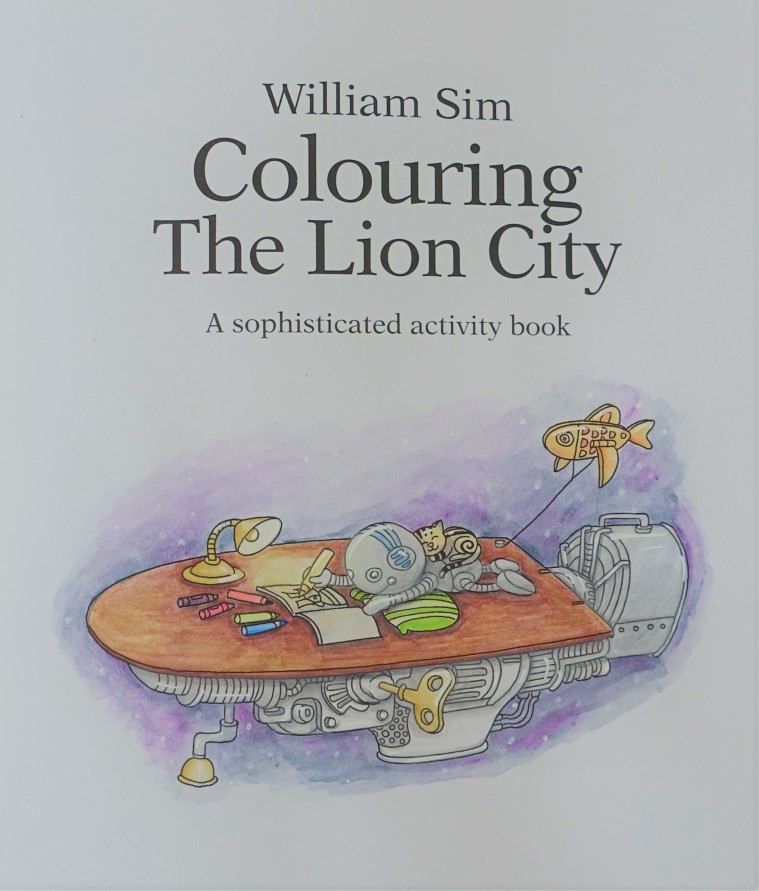 The last picture was a natural image with a variety of different orchids and many different robots. This is perhaps the only picture in the book that has more than one robot. For this picture, I went back to my Faber-Castell Polychromos pencils as well as a white Posca pen.

I did enjoy colouring this one with Polychromos. The pencils blended quite well and I didn’t have any problems with streaky lines since I was colouring smaller spaces. I did have a little issue with outlining one of the flowers white Posca pen. I never have any luck with that technique, so I tried to scratch it out and now it looks dreadful. Other than that I’m very happy with this picture. It’s so colourful and cheery.

You can purchase this book from: