On day four of our Singapore trip, we went to explore the eclectic and colourful neighbourhood of Kampong Glam. It is named after the Malay words for ‘village’  ‘gelam tree’ (Paperbark tree), since these trees used to grow in the area. This neighbourhood was formerly the home of the Malaysian aristocracy, prior to British colonisation. However, after the treaty was signed it became the designated settlement for the Sultan and his court as well as the Malay and Arab communities. Today it remains the Malay and Muslim enclave a and is known for being a trendy neighbourhood, rich in history and culture.

We arrived in Kampong Glam in the morning to have breakfast. Then visited the Sultan’s Mosque, did some shopping at Bussorah Street and Haji Lane and later returned for dinner and dessert. In my next post, I will detail our visit to the Rocher (Bugis) area, which we also did the same day.

The brunch scene in Singapore has become a seriously trendy morning activity. There are plenty of cafes offering amazing brunch and coffee, similar to what we are used to in Australia. However, it was tricky to find many that opened early and that was affordable to do daily. We did find a gem in Kampong Glam. Tolido’s Espresso Nook, opens quite early, prices are reasonable and the menu is pretty great too.

This cafe was pretty busy when we arrived, but we managed to get a table inside. We were eager to try a more western-style breakfast and some great coffee and that’s exactly what we got. We ordered a couple of meals to share. The Waffle Slammer had crispy thick waffles, streaky pork bacon, caramelised onions, scrambled eggs and salad. The Ultimate Combo had eggs, streaky pork bacon, chicken chipolata and pancakes. I also ordered one of their speciality coffees, the Salted Caramel Cappuccino. For two big people and a little person, this was plenty of food and really filling. Everything was prepared perfectly and the coffee was delicious. I definitely recommend this place to anyone who wants to experience the Singaporean brunch scene. 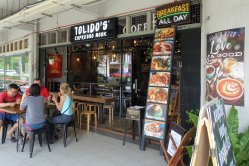 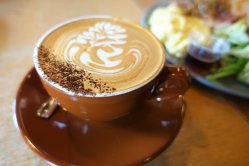 Next, we made our way through to the heart of Kampong Glam. On the way we came across Muscat Street, which was named after the capital of Oman in 1909. The arches and murals were a joint collaboration between Singapore and Oman. It represents the maritime and trade connection between these to countries and pays homage to the Arab traders who lived. 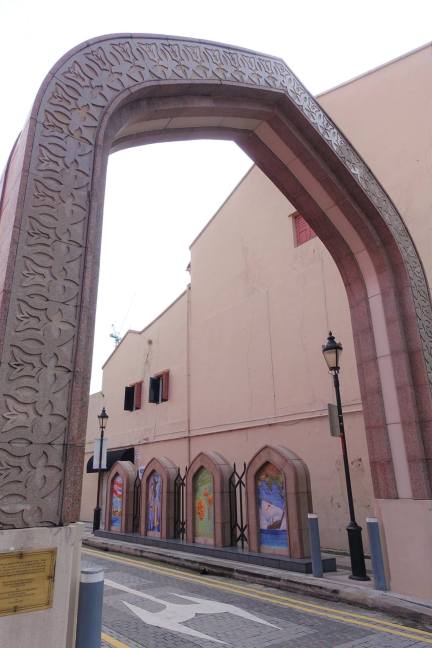 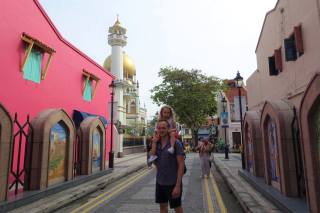 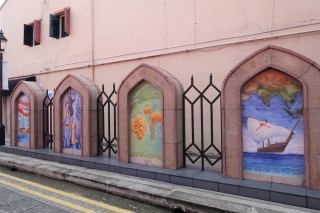 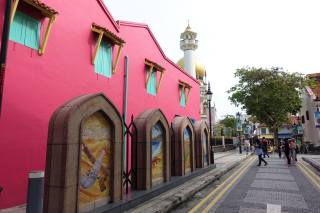 Just a few meters away from the arches is the Sultan’s Mosque (Masjid Sultan). This mosque is the most important mosque in Singapore and is quite an impressive site. The mosque was originally built in 1824, by Singapore’s first Sultan, Sultan Hussein Shah. It features a golden dome on the top and an expansive pray room in the centre of the building.

When we arrived at the mosque, we were asked to put on some extra items of clothing for modesty. Then we proceded to have a look around. We were not able to go into the worship area, but we could walk along the outsides of this area. Near the doors, there are panels of information to explain Islam. I don’t know a lot about the religion, so it was interesting to read a bit more about it. 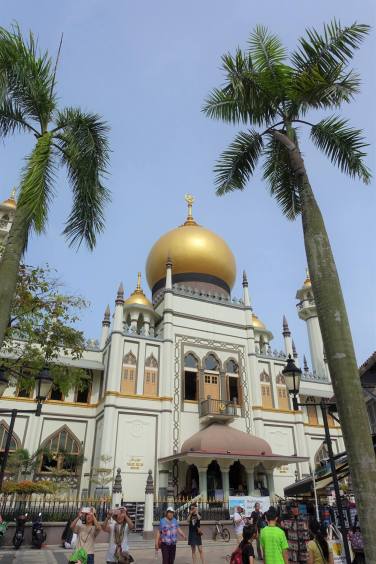 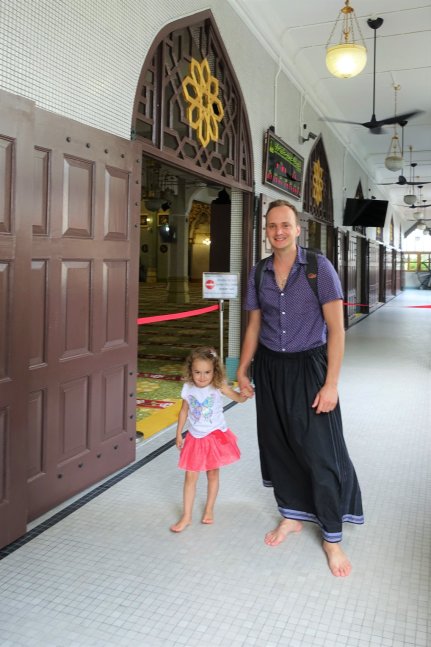 Adjacent to the mosque is Bussorah Street, which is partly a pedestrian stripe. This street was originally named the Sultan Road, but it was later renamed ‘Bussorah’ after the Iraqi city of Basra. It was also known by its Javanese name, Kampong Kaji. This is because after the SouthEast Asian Muslim pilgrims that would gather here before taking their pilgrimage to Jeddah or back to their home countries. Here they could find sheikh haji (pious men), who would help this pilgrims prepare for their journeys. They were also able to find cheap accommodations, food and other items they may need to travel. This street was largely home to Javanese population and was famous for its food scene.

Since this strip was redeveloped in the 1990s, it is home to plenty of shops, restaurants and cafes. Many of the restaurants offer Middle Eastern, Indonesian and Malaysian food. In the evenings the restaurants are very busy and the night markets are also set up. We did return later that evening, which I will tell you about later. Other than that I found this strip a great place to buy affordable souvenirs. You can find some of the usual Singaporean themed souvenirs as well as some interesting products from China and the Middle East. 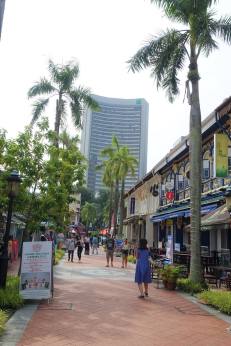 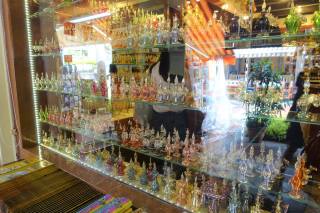 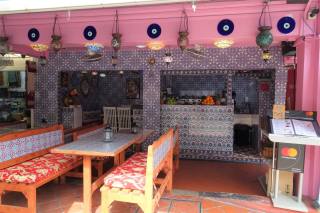 A short walk away from the Sultan’s Mosque is the trendiest street in Kampong Glam. The narrow Haji Lane is a fashionista’s haven and hipsters paradise. Here you can find plenty hole-in-the-wall boutiques and colourful cafes. There is also amazing street art, which makes this part of the quarter a must-see stop.

We visited this lane briefly before heading to do Rocher-Bugis area, which I will discuss in my next post. We did come back later that afternoon so I could have another look.  I loved the quirky and vintage clothing and accessories. If I had more time I’m sure I could have spent a small fortune here. Unfortunately, my toddler needed a nappy change and Marco was exhausted from the day so we couldn’t stay very long. 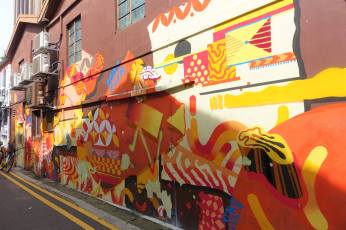 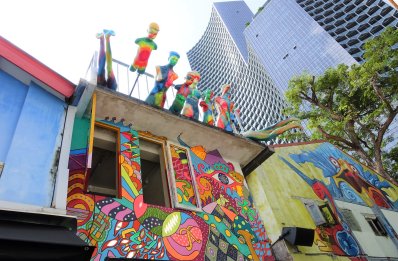 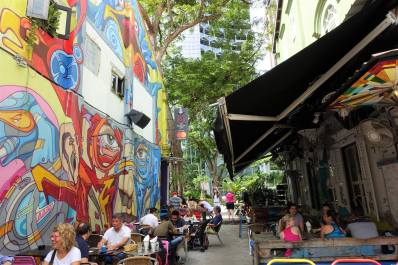 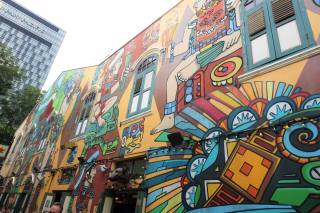 As I mentioned we had been shopping at the whole day in Bugis and on our way back to Kampong Glam, Octavia had fallen fast asleep. Before heading back to Haji Lane, we did make one stop for a cold drink and a comfortable place to sit while Octavia slept.

We came upon the adorable little cafe on the corner of Bussorah and Baghdad Street. La Marelle Cafe & Boutique is located above the street level and offers a whimsical cafe experience, which is great when you need a break from the outside world. They are the last remaining La Marelle store in Singapore, which still sells the signature merchandise designed by Mademoiselle Heloise.

We didn’t try any of the food since we were still full from lunch, we just came for drinks. The owner recommended I try the Citron Ginseng Cold Tea and Marco had the Ice Coffee. They were both really delicious and refreshing. I don’t have any photos because I actually had a throat spasm.  Sometimes my throat closes and I find myself not able to breathe and I can’t stop coughing and gulping for air. I think I scared the owner half to death. As soon as I could I drank the whole drink to open up my throat. Strangely Octavia managed to sleep through it all.

After a big day out, Marco really didn’t want to head back to Kampong Glam for dinner. My plan was that we didn’t return to the hotel, but shopped until dinner time. However, I managed to twist his arm and we journeyed back in. It was so worth it though. Kampong Glam, like many places in Singapore, is best seen by night. The streets were busy, the restaurants were full and the atmosphere was electric. 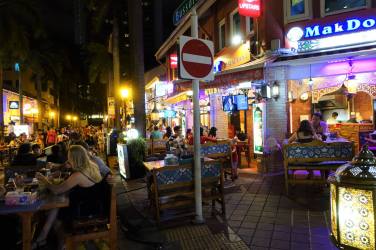 For dinner, I really wanted to try Turkish food, since that is one of the most popular cuisines to experience in Kampong Glam. This would also be the only chance we had to try something a bit different to what we had been eating on this trip. So I chose the highly recommended Turkish and Mediterranean restaurant, Alaturka Restaurant. The restaurant has a minor street presence compared some of the restaurants with large alfresco dining areas. However, they were relatively busy, with many tables reserved for later. We weren’t that hungry when we arrived, but when we started to see the food coming out to other tables we couldn’t wait to start dinner.

We only ordered a few dishes to share, which included Sarimsakli ekmek (turkish bread), Babbaganous (eggplant dip) and Karisik Kebab Platter (beef, lamb, chicken kebabs with butter rice and salad). Everything was really delicious and fresh. My favourite was probably the babbaganous and the lamb chops.  If we had a bigger appetite there was so much more I would have liked to try. 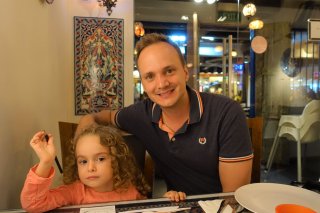 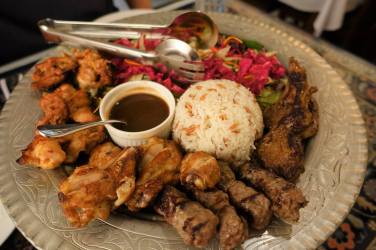 After dinner, we were pretty full, but we couldn’t leave Kampong Glam without dessert. I originally planned for us to visit Konditori Artistan Bakes, which serves up the most amazing looking Swedish baked goods and cakes. However, I had later discovered an amazing traditional Singaporean bakery cafe, offering up nostalgic baked goods.

Dong Po Colonial Cafe, serves Singapore’s first western-style cakes from the 50s and 60s that have long disappeared from bakery shelves. The owner actually gave up his gave his career as a graphic designer to become a 4th generation baker. He learned his old family recipes from his father, who had studied at the Le Cordon Bleu and worked around the world as a pastry chef. The cakes he makes have a rich history which was just fascinating to me and I’m sure brings back memories for the locals.

The shop itself is quite small has plenty of seating. The decor has a great blend of eclectic, quirky and nostalgic charm. The cafe offers set menus with familiar Singaporean toast sets (e.i kaya toast, peanut butter) with kopi coffee. They also have an extensive menu of hot and cold kopi, teas and other beverage. There were at least 20 baked goods in the cake display cases on the evening we visited. Some of these included Long Cakes, Coconut and Pineapple Tarts, Rum Cake, Apple Aloe Vera Cake, Chocolate Truffle Cake, Butterfly Cupcakes and Chocolate Butter Mint Cake. Many of the cakes also include a little bit of information on their name tag. I really liked this because I could get a better understanding of their history or what they were. The prices for the cakes was also extremely cheap, most were under $3 each. So there’s no reason you shouldn’t visit this place if you’re in Kampong Glam.

Although we were very full, we had to try a few items, including the Vanilla Long Cake, Pineapple Tart, and Coconut Tart. For me, the stand out was definitely the  Pineapple Tart. The Coconut Tart was also really nice. I wasn’t a huge fan of the Vanilla Long Cake, as it was a bit dry like an Italian Panettone. However, I realised when I watched the video on the cafe’s website that this cake was meant to be dipped into the kopi (coffee). This makes so much more sense now and I wish we knew that at the time so we could have appreciated it more. Marco did also have a Kopi, which he was pretty pleased with. We also bought some of their housemade Kaya Coconut Spread. I’ve been enjoying this one buttered toast since getting back. Its almost all gone and I’m very sad I didn’t buy five more since it was practically half the price then of anywhere else we saw it being sold and just as good.

Kampong Glam was definitely more then I expected and one of my favourite places we visited on this trip. If you interested in this area, check out this great video by SingaporenBeyond. In my next post, I will be showing you some of the Rocher-Bugis area, which we visited this same day.