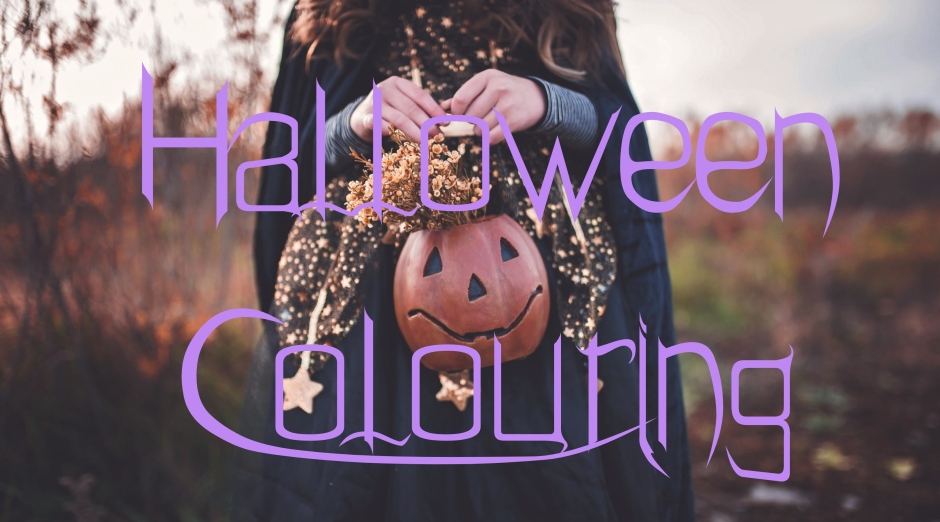 Happy Halloween y’all! Did you do anything special for the All Hallows’ Eve? We had our Halloween fun over the weekend. We Trick-a-Treated at shopping centre and did some other Halloween events for kids. Tonight we have treats ready for the two lots of kids that visit our home. Halloween is really not a popular holiday in Australia, but this year there is definitely at lot more interest then previous years.

Over October I decided to just colour in Halloween inspired pictures from a variety of colouring books. I could only get done seven pictures , since I didn’t finish the university semester until mid October. It’s been really fun to colour pictures with the Halloween spirit and revisiting books that haven’t got as much love as they deserve. The books I coloured include the Romantic Country Series, Fantasia and Colouring Heaven Anime Special.

This picture is from Eriy’s first colouring book, Romantic Country: A Fantasy Coloring Book. This picture is entitled Halloween Night, the text reads “On Halloween there is an ancient custom where everyone lights Jack-O-Lanterns and dances all through the night as they eat delicious pumpkin bread”.

Since this is one of the last pictures I coloured this month I decided make it bright and fun rather then eerie like the rest. I was actually quite stumped on what to do with the background for most of the month. I was inspired by Chris Cheng’s grass background in the Mysterious Forest tutorial, which I did do below. Tall grass always adds a bit of depth to a picture and its quite easy to do. My sky did come out a bit scratchy but its amazing what a little bit of gel pen can do to bring a sky to life. This is the second page I coloured in this book, which hasn’t be visited since Easter Colouring. I really love Eriy’s book and would love to spend some more time in them. Prismacolour pencils work  really lovely on the smooth ivory paper and the images are just so gorgeous. 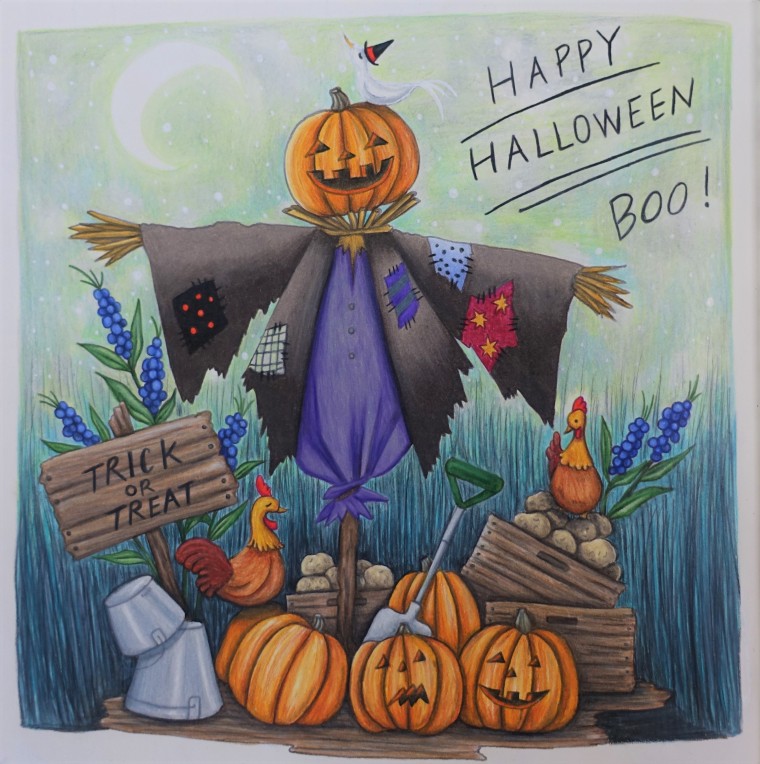 The next picture is from Eriy’s Romantic Country: The Second Tale: A Fantasy Coloring Book. The picture is also entitled Halloween Night and the text reads “It has been said that ‘one can encounter a witch’ if you dress up for Halloween and enter the forest at night. Alex and Matthew were both able to find the witch’s house.”

This is the first picture I did for Halloween and the second one I have coloured in this book. I haven’t been near this  book since Easter Colouring and its just as gorgeous as the rest of the Romantic Country Series. For this picture I was inspired by this Trick-a-Treat picture, which is a more cheerful Halloween scene. I’m not really great a night scenes, but I’m happy overall and it was a lot of fun to colour. I used Prismacolor pencils, which work really well on this paper for blending and covering thick lines.

The next couple of pictures are from Eriy’s Romantic Country: The Third Tale: A Fantasy Coloring Book and are both video tutorials by Chris Cheng. I just love Chris’s colouring videos and I have learned so much from her skill and style. I know without her guidance I wouldn’t be able to produce such stunning pictures on my own. I really recommend if your wanting to improve your skills to check out her Youtube Channel.

This first picture is entitled Mysterious Forest and the text reads, “Alex and Matthew are on their way to a Halloween party. Oh no, they may have wandered off to a mysterious place!”

Chris’s tutorial is in two parts, DARK SKY DRAWING The Halloween – Part 1 and PUMPKINS DRAWING | The Halloween – Part 2. This tutorial took me forever to complete, I think about 5 days. I am pretty meticulous to follow each pencil stroke to get the same effect, which is why it takes me so long. The tutorial uses Prismacolor pencils, white, yellow and orange gel pens. I actually skilled the yellow and orange gel pens since they were in the room of my sleeping child and I wanted to move on from this picture a soon as possible. I’m not great at backgrounds so I just loved the effect that Chris used for this picture and the colours scheme. These are definitely not colours I would have thought of to use as a colour scheme or the same pencils to get a similar effect. So I’m really happy with what I learned and how it turned out. 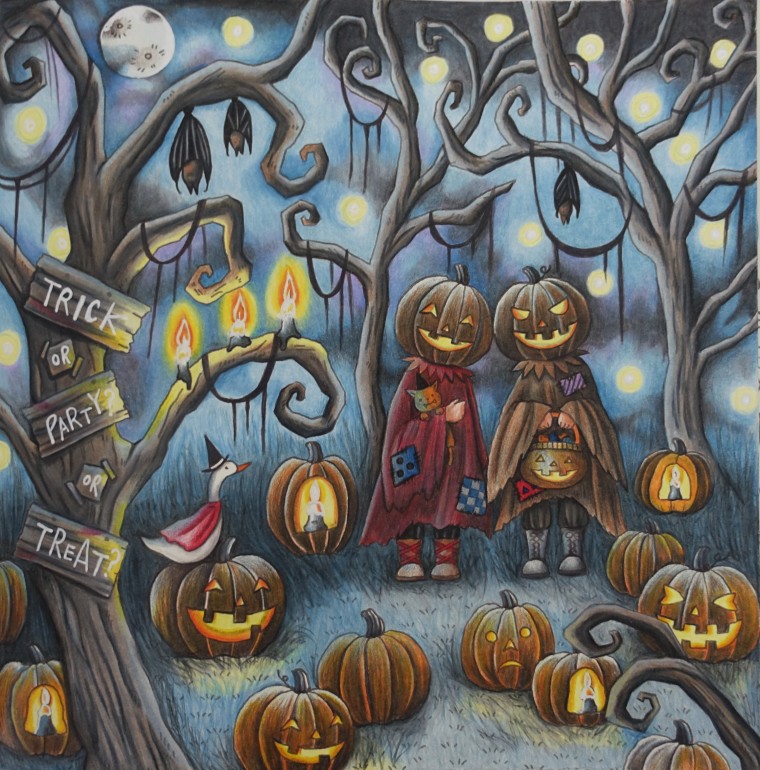 This page is entitled The Night of a Full Moon and the text reads “On the nights with a full moon you can find a witch’s tea party. If you look hard enough, you just might see a witch cackling in the moon”.

This page is adjacent to the previous page and I was considering doing it for my Halloween month. When Chris brought out this tutorial toward the end of the month I just fell in love with her version and decided to do the tutorial as well. The video is in two parts, FULL MOON COLORING Happy Witch – Part 1 and WITCH COLORING | Happy Witch – Part 2. This tutorial only required Prismacolor pencils and white gel pen. My version is not exactly the same as Chris’s as I had trouble with the clouds that I had to draw in, which was not easy. However, it was good practise since I’m terrible with clouds. I really love how the moon and witch turned out. It did take a lot of layering but was worth the effort.

The following two pages are from Nicholas F. Chandrawienata’s Fantasia. I love this book and was excited colour some of the spooky pictures in this book. The first picture of the Pumpkin Scarecrow is probably my least liked picture of this month. I started off really enjoying colouring the pumpkin with Polychromos pencils. However once I started doing the leaves and was really unhappy with how I coloured them. Then I blacked out the background with a black Tombow, which really wasn’t great on this paper. The paper is quite thick and more like card, so I found both these media were not as well suited. Even when I went in with the white gel pen to do the stars, the white just absorbed into the black. So I don’t think I will be using Polychromos or water markers in this book again. Prismacolor worked much better when I coloured the Night Elf, so I definitely will be using those pencils more in this book.

For the next page I swapped to Prismacolor pencils. Luckily the background was already blacked out, so I only used a bit of white gel pen for the clouds, moon and sickle. I’ve got mixed feelings about this Grim Reaper. I feel like its a bit dull, but then I saw other versions and I felt they put too much colour in. I think I’m the most unhappy with the moon, which was highly decorate with black lines. To be honest if I had to do it again I am kinda stumped what I would do differently. 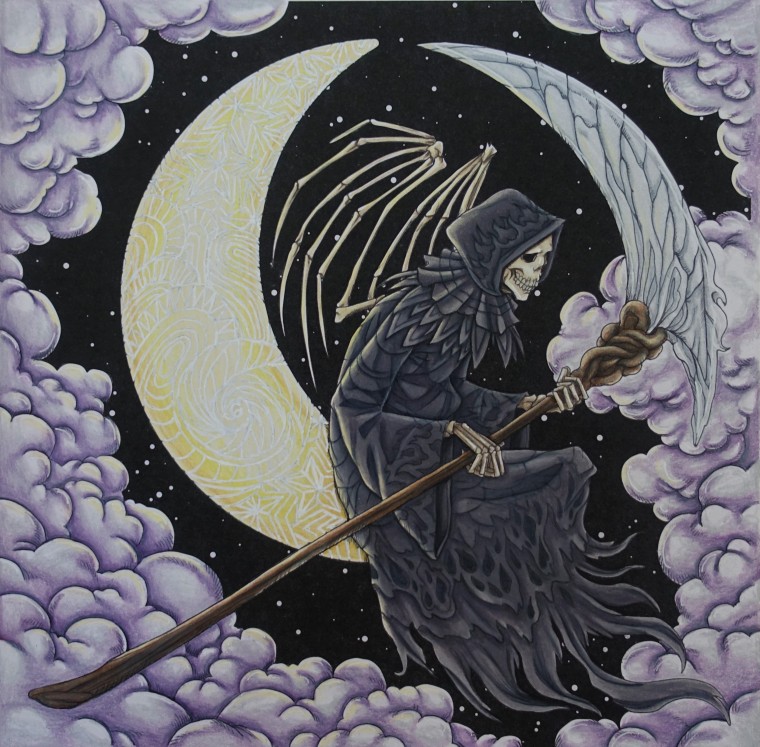 The last picture I have for you today is the Witch from Colouring Heaven Anime Special by the artist Desti. I started this picture with Prismacolor pencils for the Witch and cat and then I was kind unsure what to do for the background. I thought I would take a chance with watercolor on this paper, since previous attempts with Derwent Inktense was quite successful. Despite the thinness of the paper it actually took the Faber Castell Watercolor applied with a water pen very well. I used heaps of water and paint to get a darker colour. This took a lot of layers and I didn’t wait for each layer to dry before reapplying. There is really minimal buckling of the paper and the result was pretty good. It was also really quick. I think it took me 20 minutes for the background which was a lot faster then colouring the main image. I will definitely use this technique again in Colouring Heaven books, since artworks in these books have large areas for the background to cover. 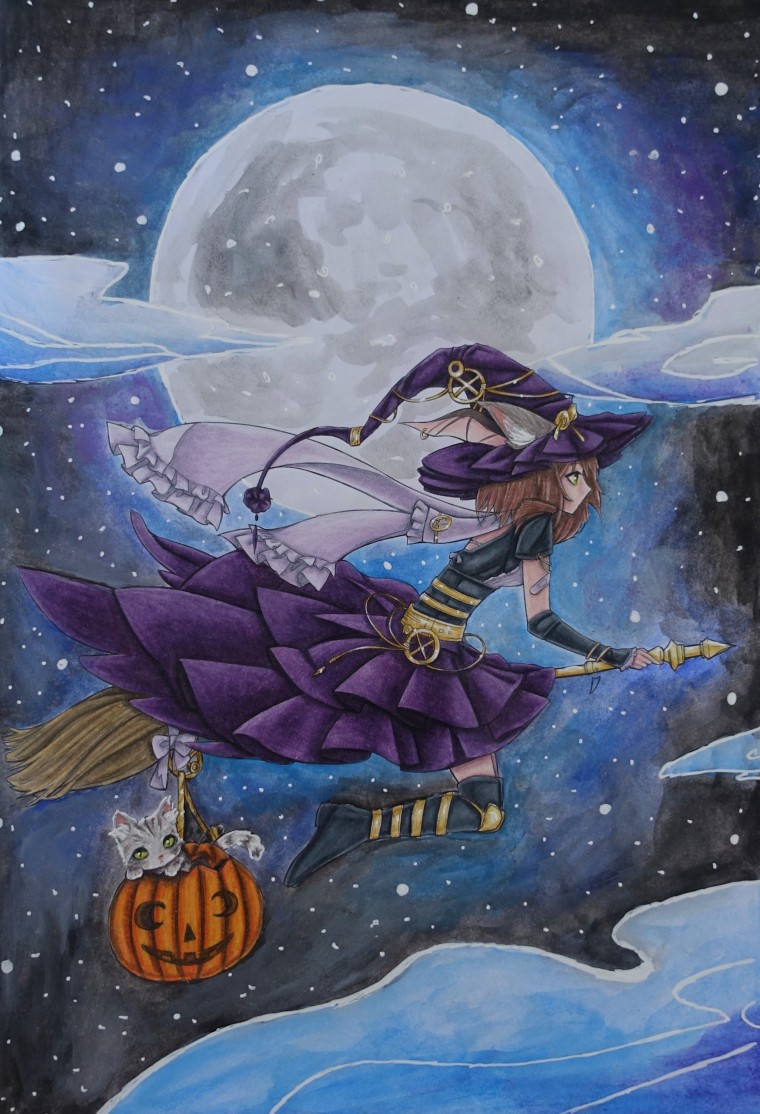