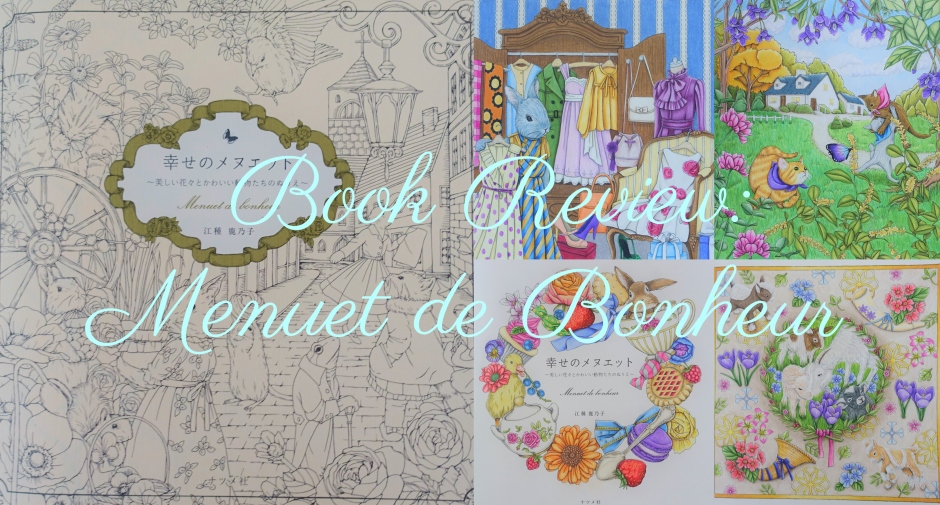 Before I finish out the year I wanted to bring you my last colouring book review of the year. I have been working on this book for a little while towards the end of the year and its was one of my goals of 2018 to do a review for this beautiful book.

Menuet de bonheur (Minute of Happiness) is a Japanese colouring book by Japanese artist Kanoko Egusa. I originally bought this book sometime last year from Amazon Japan, as it was hard to get hold at the time. It was quite pricey, but I couldn’t help myself since it artwork is just spectucular and its become one of my most prized book.

The artist, Kanoko Egusa is from Sendai-shi, Miyagi prefecture (3 hours north of Tokyo). She studied design and drawing at university and became a freelance graphic designer and later an illustrator. A few years ago she was asked to create a coloring book, which lead to the release of both Menuet de bonhear and Rhapsody in the Forest in 2016. Both of these books have become very popular within the colouring community for Kanoko’s unique style and her adorable of animal illustrations. These two books have also been published in Dutch editions, however the Japanese edition is not too hard to get hold off. This year Kanoko was also featured in Colouring Heaven Magazine for the issue Secret World of Animals Special and she also published Waltzes for the Seasons Colouring Post card Book. I haven’t heard if she will be bring out another colouring book, but I’m sure it would make many of us very happy.

This Japanese book has a soft cover, with a lite dusky pink removable dust cover, which is decorated in a collage of beautiful animal images found inside the book. It has 92 pages which are printed on both sides. The paper is white, medium quality. It is not very thick, however watercolour pencil can be used with care. The texture of the paper does take some getting use to as it is not smooth like other books.

The illustrations include cute domestic and woodland animals in both natural and human-like scenes. There is quite a bit of variety in terms of theme and style of the images. There are scenes in the home, the city, the forest, garden, mandalas and collages and there are also 18 double page spreads. There are a few themes in the book, which include the birth, market place, countryside, in the garden, summer holidays, halloween, christmas, Parisian culture, Japanese culture and marriage. Another additional extra at the back of the book are two postcards and five memory card/oraments that you can colour, which is printed on light brown paper.

I adore this book and I highly recommend it if you love colouring true to life woodland creatures in more domestic settings. My only issue with this book is the paper, but after colouring a bit in it I have gotten use to the texture.

Below are the images I have coloured in this book so far. I have included my most recently pictures as well as the others I coloured for last years for Christmas and Halloween colouring.  I have also made a video flip through, which features all the completed pictures.

This first picture is the one that brought me back to Bonheur de Menuet. I always like to colour the title page of a book, so I have something to see when I first open it. It also takes away some of the inital fear when I first go to start a new book. Since I already started this book last  year I was eager to get to this page first.

I used Faber-Castell Polychromos pencils for this page. This pencils work well on this paper and don’t need to much layering to get a good result. I really had a nice time colouring this page and bring each element to life. Since wanted this picture to flow I coloured the fruit and animals first since I knew what colours to use. Then I coloured the rest of the elements with colours that would contrast eachother. I also tried to reuse as many of these colours to be more harmonious. I find this technique works best for me as I’m not a great planner of colour schemes.

The next page I coloured was this adorable bunny fashionista. I switched to Prismacolor Premier pencils, which I hadn’t used in this book since Halloween. I really didn’t like how these pencils previously worked on this paper. However, I am more experienced now and have learned to colour with many light layers. So this time around I really enjoyed using Prismacolor and continued to do so as you will see below. This is another picture which I didn’t know which colours to use. So I started with the each item of clothing and slowly used contrastly colours for each to complement the last. I decided to colour the bunny with grey blue fur like adorble little guy.

This next picture I did for my daughter, who is obsessed with ginger cats. I enjoyed colouring this page the most, but it probably took the most time. I modelled the background on this farmyard picture. It took me a while to find the right picture to inspire my background and the rest was easy from there. The grass however took forever. I tried not to rush it to give as much depth as possible. The stars of the page, the kitties, I left until last and although they are a tiny part they are definetly the most important and gorgeous part of the picture. I had again used Prismacolour which work like a dream on this paper and was great for layer and blending.

This last picture is probably my least favourite of the bunch. I had high hopes for this page of goats but it just didn’t come together like I imagined. It was a bit diffcult to make all the elements cohesive and the background is a bit vanilla. So I was really happy when this page was done. Besides Prismacolor, I also used a white Posca for the fur and details.

These last pages were done for Christmas and Halloween projects last year. The very first picture I coloured in this book was this Halloween picture. I used Prismacolor pencils and it was ok for the small details but the sky was a disaster. I really didn’t like the way the pencil had layed down on the paper, but in hindsight I was probably pressing too hard.

The next page is a very special one for me, since it was acutally my first page that made it as a daily banner for the Facebook colouring group that I am a member of. I used Faber-Castell Polychromos, a white Prismacolor Premier pencil for blending and a white gel pen for details. This page taught me about that mistletoe was white and holly was red, since I thought it was the other way around. I also found out after extensive searching that these are chipmunks, which we don’t have in Australia. I really liked using Polychromos pencils on this paper, but I tried to be careful since these pencils are quite hard and the paper is quite thin. I also coloured the adjacent page with Prismacolor and quite a bit of gel pen. I am quite happy with both.

This book can be purchased from: