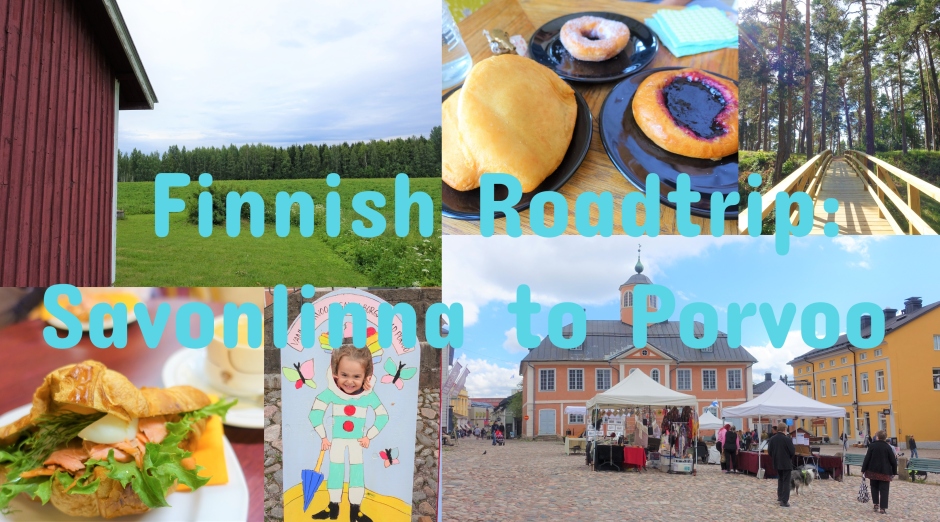 This is the end of my Finnish Roadtrip and Nordic Adventure. Since this only covers and a half days I combined it all into this last post. One this day we departed from Savolinna, made a stop in Lappeenranta and arrived in Porvoo. We only stayed on night in Porvoo before making our way back to Helsinki for our flight. I am so happy we made this last stop, because I really loved exploring Old Porvoo.

We woke up to a beautiful site out of the window of our summerhouse cottage. It was so nice to feel like we were walking up in the middle of nowwhere. It was so quiet and serene, but we need to get up and going to start our last day.

We arrived inn Savonlinna’s town centre for an early morning breakfast. Today was Monday, so we expected that today everything would be open, meaning an end to our Midsummer nightmare. I would have loved to spend time walking along this main shopping drag and also visiting Linnankatu to see the arts and handicrafts. However, we were up quite early and nothing was opening for another hour. So we had to decided if we waited or kept going to our next stop Porvoo.

We didn’t see a lot open for breakfast, but we did spot Herkku Pekka. This bakery offered a range of sweet and savoury pastaries, quiches, sandwiches and cakes. All of which looked delightful for three hungry people. I had the Salmon, Egg annd Salad Crossiant and Perunapiirakka. Marco just had a Crossiant and a coffee and O had a sweet Finnish pastry for the very last time. All the pastaries were freshly made and delicious.

So we decided to keep driving to Porvoo, which was going to take about just under four hours. This was the longest stretch of this Finnish roadtrip so far, so we were eager to get it over and done with.

On our way we stopped for morning tea in Lappeenranta. This town is about about two hours from Savonlinna. If only we had more time we could of visited its multiple attractions, but time was off the essence. We only stopped at the bakery, Kesämäen Leipomo Oy, which is somewhat of a workers stop. I read that they had a speciality, Liha-Piirakka, which is a savoury donut filled with meat and rice. Marco was more interested in trying the Hevosenkenkä maidoton (milkless horseshoe pastry) and Viinermukki laktoositon (lactose free apple donut). I don’t know if we ordered wrong or we were expecting too much but the were ok. We may have been happy with some jam danishes. However, on the bright side, most of this stuff was either vegan or lactose free.

Porvoo is the second-oldest town in Finland and was the perfect end to our Finnish roadtrip. This historical trading town was established back in 1380. The Porvoo Old Town is paved with cobblestone, lined with with colourful wooden houses and the waterway features Red shore warehouses, which once held exotic delicacies from distant lands. If you like to wander through bohemian and antiques stores and sample sweet delicies then this is the place for you.

One of the must visit stops is Brunberg’s Chocolate Factory, which has been in operation since 1871. . Here you can sample and buy a variety of different chocolate and confectionary, which I promise you as very high quality. Once we tried a few chocolates we couldn’t leave without purchasing some to bring back home.

A short walk north from the centre of the Old Town is the Porvoo Cathedral. It was originally built in the 13th century and was made of wood. However it was later expanded and rebuilt after numerous fires in the 15th century. It is quite pretty inside and retains medieval feel.

Nearby the Cathedral we came across the Iso Linnamäki Castle Hill. It is free to visit this park, but you do have to use your imagination. It was once the site of an old medieval castle, which overlooks the city of Porvoo. The first wooden castle would have been built here in the late 1200s by the Swedes. It was modernised at the end of the 1300s to include moats and a wooden bailiffs castle, which was built under Germ administration. It was later demolished and abandoned in 1400 by the Scandivians, to destroy any reminents of the German period. It wasn’t until the Great Northern War of 1700-1721 that Russians occupied the Finland and took this hill as a gunpost. Much of what had been preserved was later destroyed by local inhabitance, who illegally took gravel from the hill . Today Castle Hill is a serene, quiet space that has lovely views of the Porvoo. Albert Edelfelt used the view for his famous landscape in 1892, which looks verily similar today. You can even see the Red shore Warehouses, which are one of the most photographed buildings in Porvoo. We weren’t able to get close to them, but I did take a picture as we were driving past later.

Before leaving the centre of Porvoo, we had a later lunch at Hanna and Maria. This little Finnish restaurant is in the centre of the old town and has been arounnd for 30 years. It was named after the daughters of the merchant Oskar Simolin, who resided in Porvoo in the 19th century. It is only open during the day from about 8am until 4-5 (depending on the time of year), 7 days a week. They offers a variety of homely Finnish dishes, prepared with mostly local ingredients and the prices are quite reasonable. They have an variety of steaks and schnitzel, reindeer and liver, served with mash potato and salads. They also have a variety of cakes and sweet treats. Octavia and I shared the Sauteed reindeer/Renskav with lingonberry jam, mash potatoes, salad and bread. Marco had a Wienerschnitzel/Vienna Steak, with mash potatoes and salad. The dishes tasted as good as any homemade dish you would loved to be invited over for and the salads were very fresh.

Our last stop before going back to our apartment was Porvoo Art Factory/Taidetehdas Konstfabriken. Here you can find a few stores, including H&M, a cinema and a gallery. In regards to shopping there is really not much here. Since I arrived quite late I am not sure I was mean to be walking the halls of the gallery, since there was no one around. I only saw a little bit, but I think they were probably setting up for a new exhibition. I’d probably skip this unless your coming for a big show.

Our last accomodation on this trip was at this beautiful Airbnb, located in the suburbs not far from the centre. It had a glorious garden in the backyard and was beautifully decorated inside as well. One of the nicest features was the large bathroom and sauna. It was the perfect place to relax and stay in.

While we were enjoying our accomodation we did get a little bit peckish again, so we ordered some takeaway from Thai Street Food Porvoo. They offer a small, seasonal menu of Thai favourites and they are pretty popular rated place. The dishes we ordered Phad Thai and Stir fried chicken with cashews and noodles. They were both generous portions, tasted spot on and served with a fresh little salad.

The next morning before leaving Porvoo we made one last stop to a bakery Marco had already scoped out the day before. Tuorila’s Home Bakery is a Finnish artisan bakery thats been around for 25 years. They offer quite a variety of fresh breads, sweet and savoury pastaries. The prices were extremely reasonable for some of the best delicious pastaries we had found in Finland so far. We ordered a sweet donut, blueberry danish, and savoury LihaPiirakka (meat and rice filled). I can’t recommend this bakery enough if your in town.

The drive back to Helsinki from Porvoo only took about 30-40 minutes. Since we had a couple of hours before we had to be at the airport to go back home we stopped at Kauppakeskus Jumbo (shopping centre). This is only a 7 minute drive from the airport, so its perfect if you need to waste 1-3 hours. Upstairs we found a nice little coffee shop, called Coffee House, which had decent coffees and a variety of lunch and snack items. As for shopping, you can find all the big brands as well as smaller boutiques.

We that is the end of both my Finnish roadtrip and Nordic Adventure. I hope you have enjoyed it as much as I did reminising about our trip. If you have any questions feel free to drop me a comment.