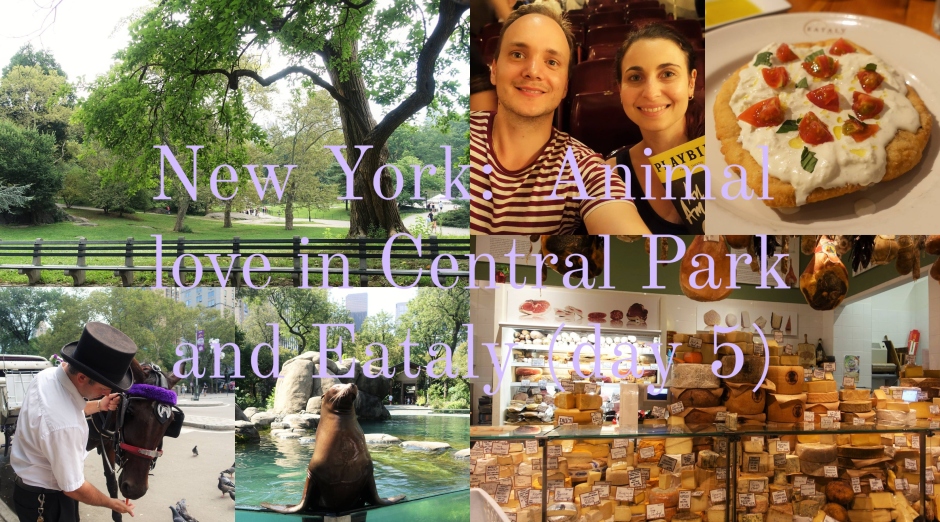 Day 5 in New York was another full day in the heat of summer. We took a magical journey on horse and carriage through Central Park and visited the animals at Central Park Zoo. This was followed by a Broadway show, dinner at the amazing Eataly and visit to The LEGO Store.

But first, breakfast. As I mentioned previously I had been doing mamma-daughter breakfast dates out instead of eating the mass-produced food at the hotel. Today we visited Le Pain Quotidien again. O and I shared a big bowl of organic steel-cut oats and berries. It was really wholesome and satisfying.

Our first activity of the day was a horse and carriage ride around central park. We found our coachman on 59th St, across from the Plaza. I can’t remember exactly how much it cost, but I’m sure it was around $60-80 for 30mins. I think if you book it is more expensive, but then I wasn’t visiting in high season. It included commentary by the coachman, of the history of the park and sites of interest. It was a lovely experience and a nice way to get an overview of the park in small time frame.

After that, I was a little hungry, so I stopped into The Plaza Food Hall. There are so many different delicious food options for a quick lunch. I’m not sure why I didn’t take any photos inside, but you can see a video of the food hall (see link). I had a prawn roll and seafood chowder from Lukes Lobster Red Hook, which hit the spot.

Next, we visited the Central Park Zoo. I’ve always dreamed to visit this zoo since it’s so famous. It is probably the smallest zoo I’ve been to, but it had a nice variety of animals and is the perfect places to take little kids. Within the zoo, you can also find the Tisch Children’s Zoo, which offers children the opportunity to pet small farm animals.

Afterwards, Marco and I went back to Broadway to see An American in Paris. We actually won the tickets in the Broadway Lottery. We entered the lottery every day and won twice, so Marco and Sally also saw another show. If your going to enter the lottery you do have to be flexible with your itinerary. This play was in the most beautiful and historic Palace Theatre. As for the play, I hadn’t heard of it or the original film. I really enjoyed the story and the performance. It would of well been worth paying full price.

For dinner we visited the Italian market hall, Eataly. It is the brainchild of Oscar Farinetti, who opened his first location in Torino, Italy. He has since opened more across, Italy, the USA, and in various other countries. Eataly offers various coffee and dessert bars, deli, fresh food, pasta, seafood and meat markets; as well as speciality restaurants, retail, classes and events. This was the first Eataly that I have visited, but I have since come across another in Stockholm last year. I hope an Eataly will open in Australia in the near future. I also wish to visit the Eataly Bologna Ambasciatori, which is meant to be like a foodies theme park.

There are two Eataly’s in New York, in the Flat Iron and Downtown district. When we visited the Flat Iron location had just opened. I didn’t know what to expect, so I was blown away by the amazing food and wished I could try one of everything. Since I couldn’t cook in the apartment I just bought some beautiful exotic organic fruits, that I hadn’t tried before.

Since we were here for dinner we look for a restaurant that could accommodate us. There were four restaurants, including Le Verdure, Manzo, La Pizza & La Pasta, Il Pesce, La Piazza. Since my visit, it appears that Le Verdure was closed and replaced with Il Pastaio di Eataly and Serra D’autunno by Birreria was added. Anyway, on this particular evening, there was only room at Le Verdure, the vegetarian restaurant. I was pretty excited about this since I was looking forward to trying some traditional dishes inspired by vegetables.

We ordered a few things to share, including Pizza Fritta with Stracciatella, tomato & basil; Fritto Misto, Gnocchi alla Romana con Bolognese di Verdura and Cannelloni con spinaci e pomodori. This was one of the most amazing dinners we had in New York. The food was just so well made, crispy, crunchy and full of flavour. After dinner, I also tried a Pumpkin Tiramisu from the dessert counter and Marco had a Nutella crepe from Nutella counter.

On my walk back to the hotel, I came across The LEGO Store, in the Flat Iron district. This was the first one I had ever been to, so it was more exciting at the time. It was pretty packed considering it was nearly 8pm. Luckily my toddler was too tired to get out and want to play with everything she saw.

Tomorrow, we visit the Rockefeller Centre, see the view from the Top of the Rock Observation Deck, Natural History Museum and have dinner in Little Italy.