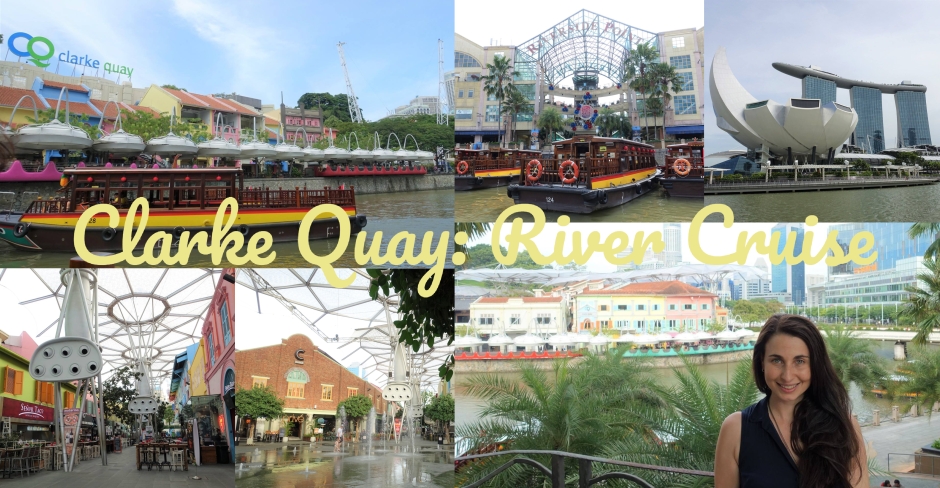 After visiting Tiong Bahru, we made our way to glitzy hot spot, Clarke Quay. We had intentions of doing the River Cruise, a bit of shopping and dinner there. This is actually my second visit to the quay. Its been about 8 years since I bump into a friend from back home while on holidays and went out to dinner with her and some friends at a fine dining Chinese restaurant. I just remember pretty colourful riverfront, the hoards of people and the extra $35 tea tax on top of our dinner bill.

Clarke Quay is a pedestrian mall that runs along the Clay Quay Jetty, on the Singapore River. In Colonial times, Boat Quay was the commercial center and Clarke Quay was where the warehouses were located and bumboats were moored. However, the Singapore River became so polluted that in the 1970s and 80s government moved the cargo services elsewhere and clean up the river. Later Clarke Quay was redeveloped into a commercial, residential and entertainment precinct. The Clarke Quay Festival Village was open in 1993 and Clarke Quay was continued to be revamped over the next 10 years. Today it is a bright and glitzy mall with colourful shop facades and riverfront dining, restaurants, bars and night clubs.

The best time to visit Clarke Quay is in the evenings, when everything is open and people are walking the strip. However, you can still visit during the day, like we did. If I were to revisited Clarke Quay I would definitely visit at night, unless I was in the area to see Fort Cannon Hill (behind Clarke Quay) or visiting the Asian Civilisations Museum and National Gallery Singapore (further down). If you do visit during the day there plenty of lunch deals.