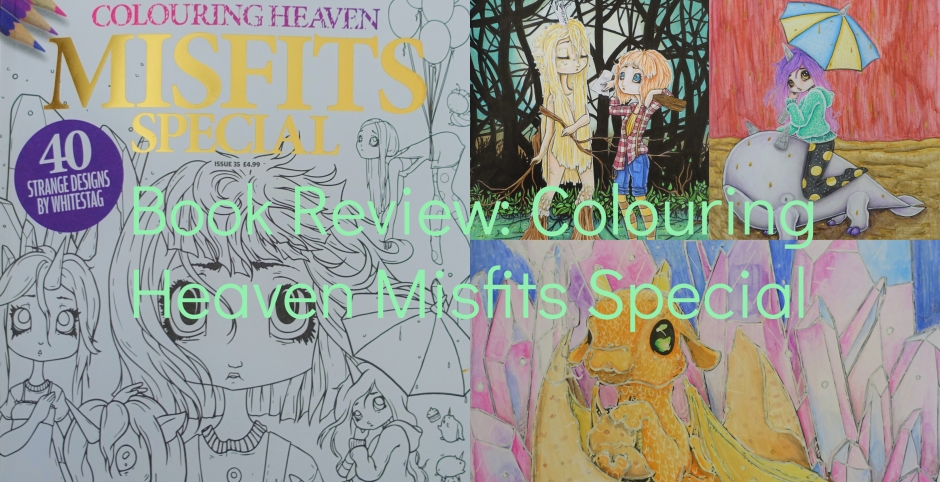 This months Colouring Heaven magazine released in Australia is the Misfits Special (issue 35).  It showcases the art of White Stag aka Terra Bidlespacher. I wasn’t sure if I was going to keep buying this magazine every month, but when I saw this issue I really liked the quirky artwork and wanted to see how I would go colouring this style. I really enjoyed it, so I have brought you another colouring book review for today.

White Stag aka Terra Bidlespacher is an American artists, based in Pennsylvania. She is known for her lowbrow, pop surreal, gothic fantasy art.  Her unique style is characterised by the strange and cute girls and creatures, in scenes that are both intriguing, creepy and sometimes humorous. Her artwork mainly features she misfits characters painted in acrylic, but she also does drawings using ink and graphite. She has produced a series of Misfits colouring books with featured her original artworks. There are currently 10 full size colouring books and two mini colouring books. Most of these colouring books explore different themes, including aliens, zombies, unicorns and halloween. For more information of where to purchase White Stag’s colouring books see the end of this post.

I don’t currently have any of White Stag’s colouring books in my collection, so I was very happy to see her work featured in this months Colouring Heaven magazine. The issue features a compilation of 40 designs taken from White Stag’s colouring books, so there is quite a variety in themes of themes, styles and characters. The issue itself is the same format as always, matt cover (that you can colour), 40 line drawings on single sided thin-medium paper, with titles for each picture. This issue only has the names of the artworks and no other information about each work. I appreciate this anyway, as I  can google the original artwork to glean inspiration for backgrounds, colours, textures and light sources. This issue also features some Christmas themed pictures, so I will be sure to return to this book in the future.

For this issue I coloured three pictures and used a varieties of mediums, including water soluble materials.  I also made a video flip through, which is up on my Youtube channel, along with more video of colouring book flip through with completed pictures. You can also see more Colouring Book Reviews and my Colouring Galleries and my Misfits Special Gallery on this blog.

The first picture I coloured in this book is entitled The Unfortunate End to Tree Girl. You can see the original artwork here and find this line drawing in Misfits – A coloring book No. 3. The original artwork is quite is quite gothic, using mostly greys and browns, with duller shades of green, orange and red. For my picture I wanted to give it a big pop of colour. I used Faber-Castell Polychromos pencils, some white Posca for outlines and detailing and a black Faber-Castell  Artist Pitt pen to make the trees darker. The trees were already filled out in a dull black. I tried to avoid them, then I ended up going over them in pencil and really didn’t like it so I blacked them out. I think this was the best decision in the end. I really love how this picture turned out and it gave me a good idea of how I could make these drawings mine own. 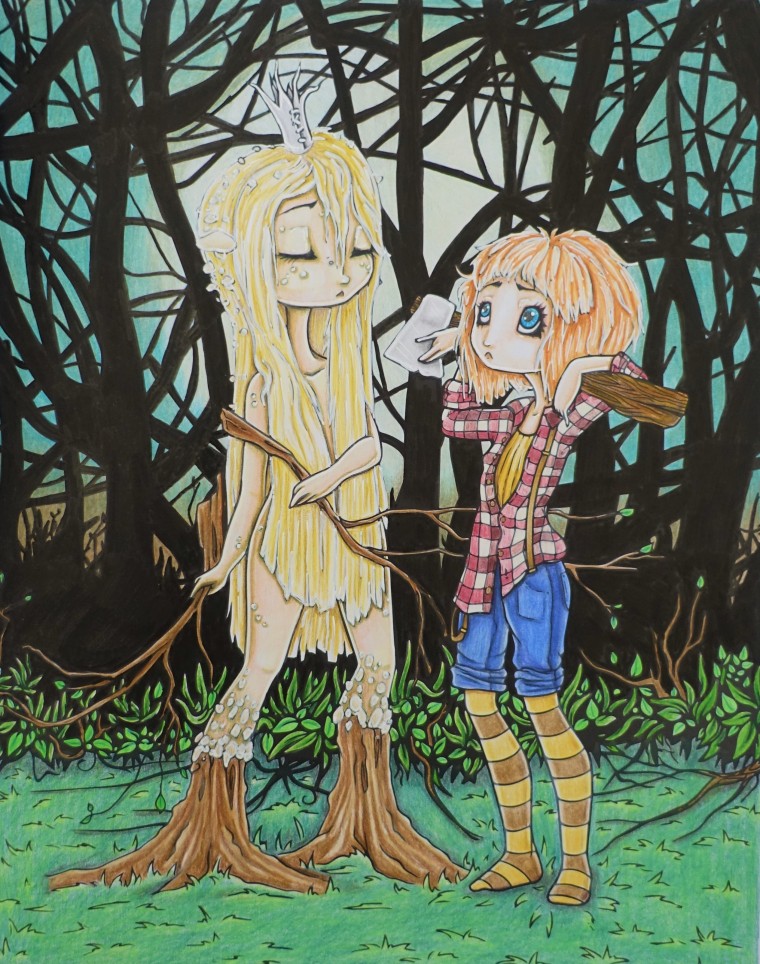 The next picture I worked on was Hatchling. As far as I know this image doesn’t appear in any of her colouring books and I couldn’t find a picture of the original work. However, I did find a video of her painting this design. For this picture I wanted to experiment with my Faber-Castell Watercolor paint box 12 colors and a water pen. In Colouring Heaven Anime Special I did use Inktense pencils with water and found that this paper takes it quite well. In this picture I did use quite a bit of water and I had a little big of wrinkling of the paper but other then that no problems. After I used a white Posca pen, which I went a bit crazy with. So to cover some of the lines and do a bit more shading I went over some areas Prismacolor pencils. I was it a bit of rush though, so some parts are a bit streaky. It was more an experiment to see how they would react together. So its not my finest work but a nice quick one. 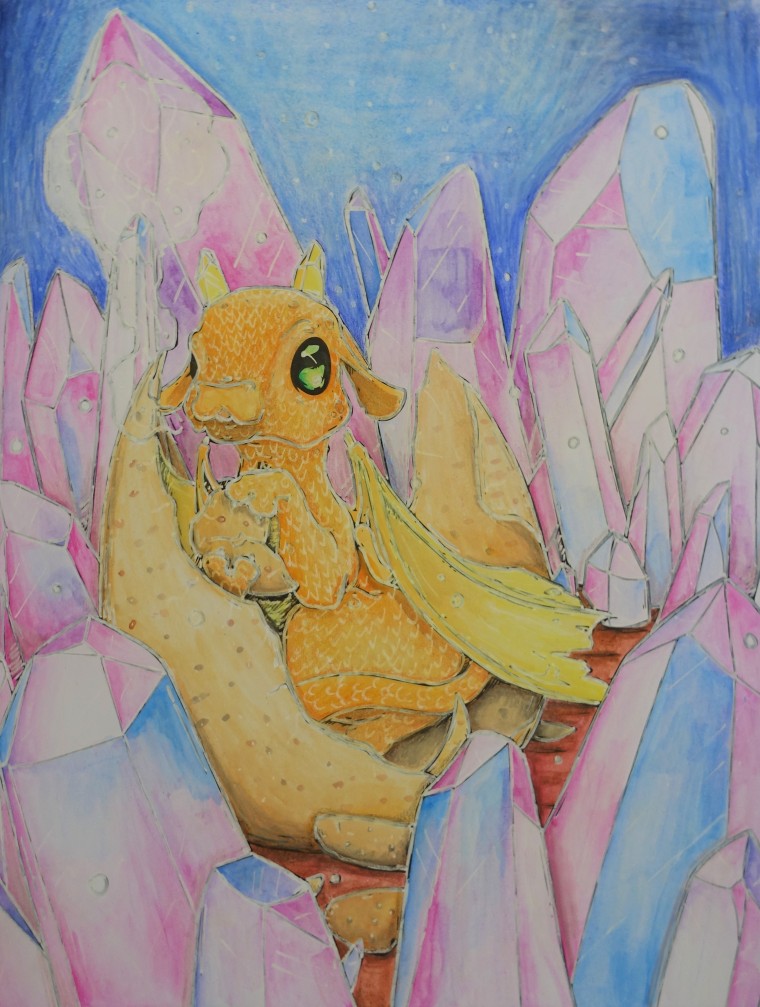 My last picture is entitled Out for a Stroll. You can find the original artwork on her Etsy page (here) and this design can also be found in Misfits – A coloring book No. 1. This is another one that I experimented with with a few different mediums. I used Derwent Inktense pencils for the background. I was inspired by this artwork Autumn Rain by Aeppol (Forest Girl Colouring Book) and wanted to try to relica the red sky. For the whale and girl I used Faber-Castell Polychromos pencils, since they are quicker to work with then Prismacolor pencils on this paper. However I did use a white Prismacolor pencil for blend. For the rain drops I used a gold Uniball Gel Pen. I also used white Posca pen for outlines and details and Costco Gel n’ Roll 50 Gel Pens for other details, including the hair, horns, umbrella, clothing, white nails and grass. This one isn’t perfect but I still like how bright and colourful it turned out. Its definitely not my usually style, so it was fun to do something different. 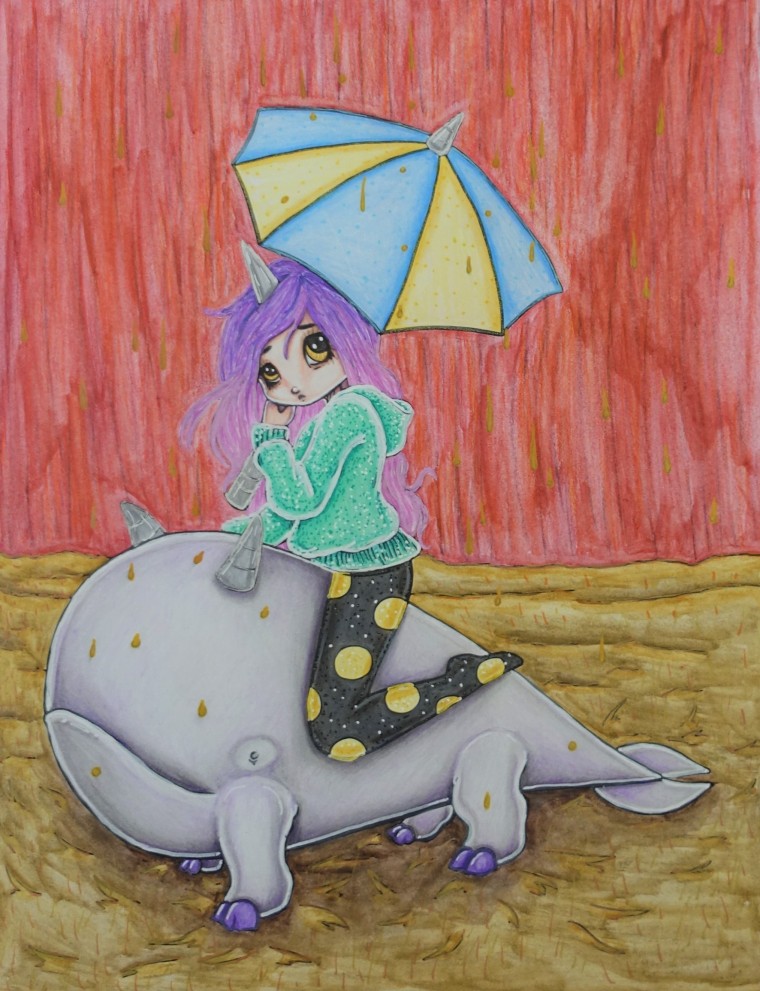