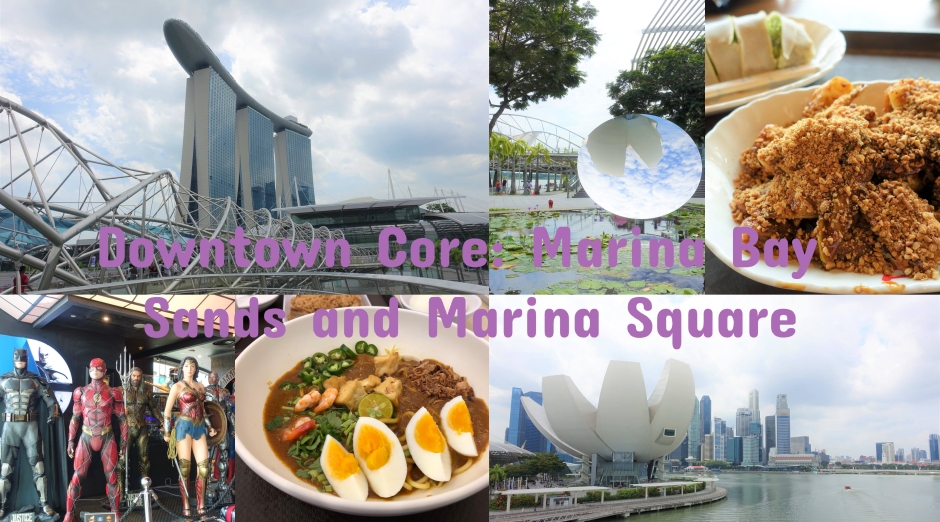 I’ve been busy with uni (and colouring) recently, so  I haven’t had a chance to continue the rest of my Singapore Adventure. We are up to day five, when we visited the Downtown core. We did some window shopping at The Shoppes at Marina Bay Sands and some real shopping and lunch at Marina Square. Later on we also visited the Gardens by the Bay, but since we covered so much there I will write another post dedicated to that.

On this day we got up bright and early visit the spectacular Shoppes and have breakfast. The Shoppes houses the largest collection of luxury and premium brands, including a huge range of stores dedicated to luxury children’s wear. We didn’t come just to gawk at the beautiful shop windows, but also to see the amazing architecture of Marina Bay Sands. Below are some of the photos we took as the shopping centre began to open,  as well as a few later at lunch time. The food court is quite large and offers a huge range of hawker stores. We didn’t eat here since we were between meals when we saw it. 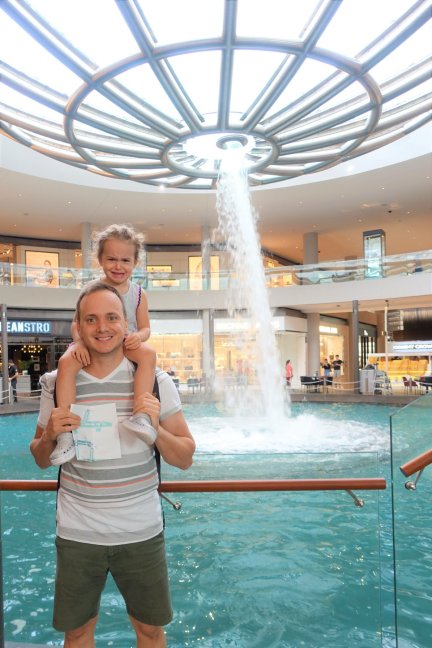 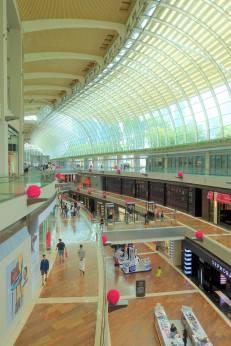 There aren’t to many cafes that offer breakfast before the shops open at Marina Bay Sands. We had a choice between Toast Box,  DC Comics Super Hero Cafe or the SweetSpot (Hotel lobby). We choice Toast Box, since I had been eager to try their food, plus the comic cafe had terrible reviews and SweetSpot was in another building.

When I first arrived in Singapore I noticed the cafe chain Toast Box, located in various shopping centres. I wasn’t that interested in trying their food. However, after realizing that most of the Singaporean coffee houses we visited so far were chains, I decided we should give Toast Box a chance too. Generally every Toast box I had seen were very busy and this morning was no exception. At this store you actually need to stand in line and then order before you can take a table inside. Although I did see some people break this rule while their family members ordered food. We were able to get a table after we ordered since customers are constantly coming and going.

We decided to try a couple different breakfast items that we hadn’t tried yet. Marco ordered the Pork Floss Toast Set, which came with thick cut multigrain bread with pork floss on top,  kopi and  two boiled eggs. Octavia’s got her favourite Kaya Toast, also on thick cut multigrain.  I ordered for myself the Mee Rebus, which is a popular dish in both Singapore, Malaysia and Indonesia. It  has hokkien mee noodles in a curry gravy made from shrimp broth, shallots, lemongrass, galangal, salam leaf, kaffir lime leaf and gula jawa. It was garnished with hard boiled egg, cooked shrimp, calamansi lime, green chililies, fried tofu, fried shallots and chinese celery. We were all pretty happy with our dishes.  I really appreciated that they offered multigrain bread, which actually looked more like wholegrain, since every other cafe had white bread. I also got to knock off another dish off my list of dishes to try. 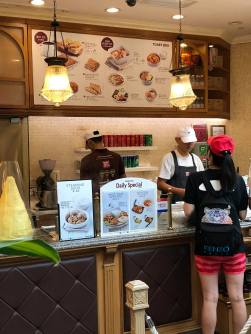 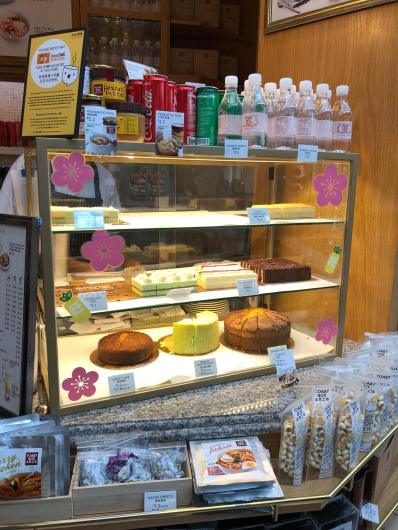 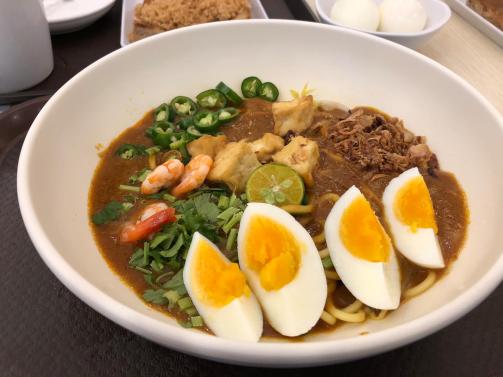 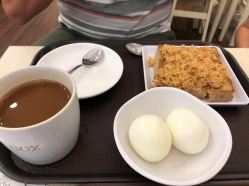 After breakfast we went up to see the DC Comics Super Hero Cafe, which was pretty cool. The store had life size mannequins of the superheroes as well as a few in the glass windows in action positions. Unfortunately those in the glass window didn’t photograph well with the glare. There was also a small gift store beside the cafe. If we had more time it would of been nice to visit for coffee and cupcakes. 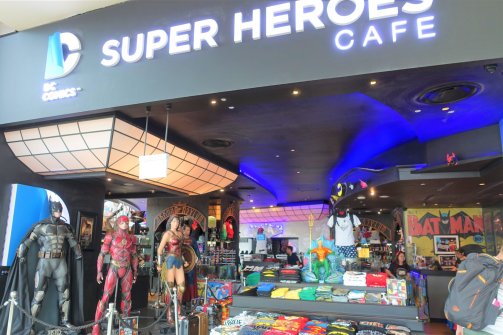 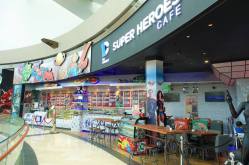 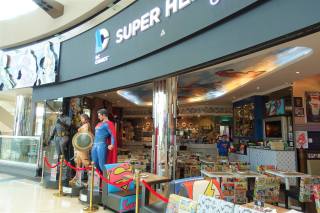 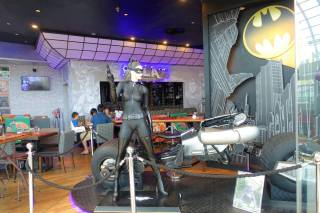 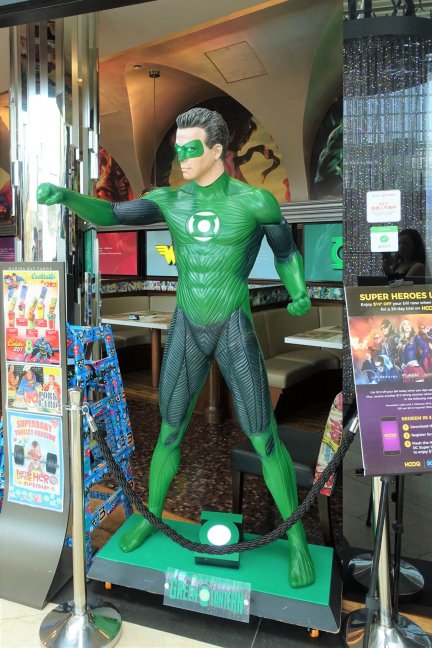 This shopping center doesn’t just offer luxury shopping and dining. It also has a Digital Light Canvas. You can enjoy the watching it from all three levels or pay $5 to walk on it yourself. I noticed the screen really came alive once people actually walked on it. Octavia and Marco had fun running across it while I watched them from above. 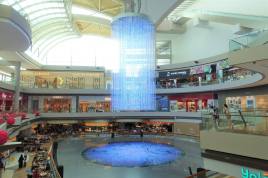 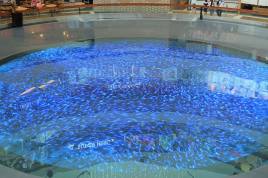 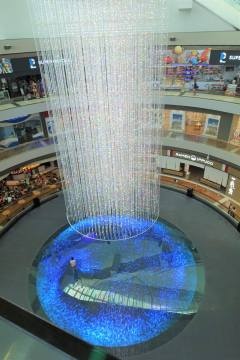 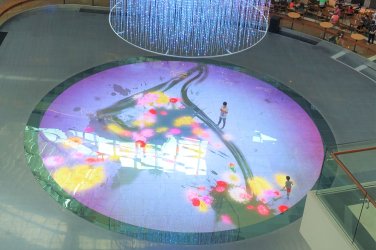 At night there is actually an amazing Light and Water show, called Spectra. It is free to view, goes for 15 minutes and is repeated at a few intervals. We didn’t get a chance on this trip to see it, since the first showing is at 8pm and by that time we didn’t really want travel back here with a tired toddler. 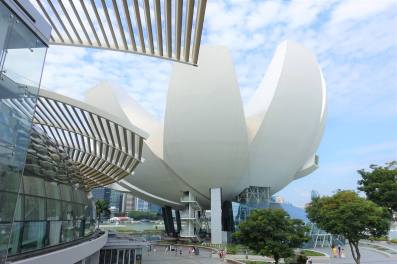 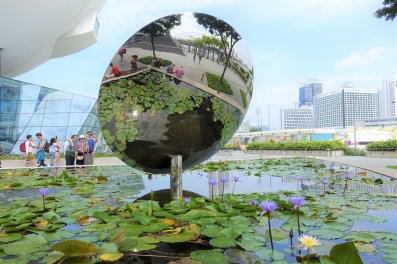 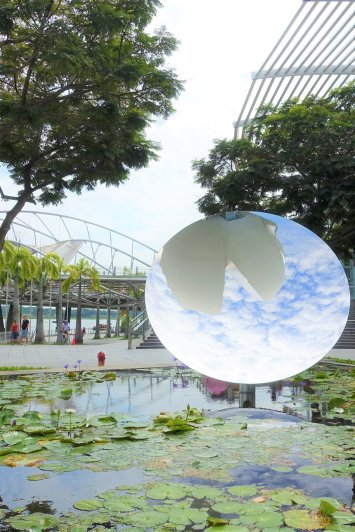 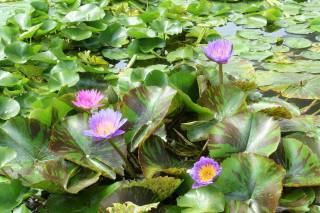 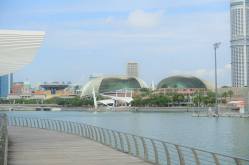 Since we didn’t do any actually shopping yet we traveled over the Helix Bridge to visit some more affordable shopping centers. We only visited Marina Square, due to time constraints, but I would have also loved to visit Millenia Walk and the Esplanade.

In Marina Square we found our Chinese Zodiac Animals. We actually saw these kind of displays everywhere, but this was probably our favorite. I also found a Faber-Castell store, which was very exciting as a colourist. I actually did quite a bit of shopping at this centre. I didn’t even get to visit all the stores, but I’m sure if I did I would have bought even more. This was actually one of my favourite shopping centres. It wasn’t pretty but there were many great stores I didn’t see elsewhere. 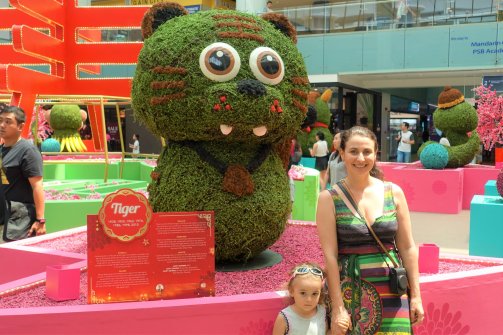 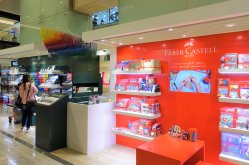 For lunch we visited the The Gallerie Food Court on the top level of Marina Square. This modern dining hall offers 29 stalls and kiosks, as well as a fantastic view of Marina Bay Sands. It was just unfortunately that the window was a little dirty and the sky was grey but still a great view to enjoy lunch.

Marco stuck to what he knows and had the Sizzling beef with pepper rice from the Pepper Lunch Express. I wanted to try something different, so I ordered Rojak and Popiah from Apa Kitchen Rojak.

I have had Popiah before, which is  Fujianese/Chaoshan-style fresh spring roll (made of thin wheat flour crepe) which is typically filled with  stir-fried turnip, jicama, bean sprouts, french beans, lettuce leaves,  grated carrots, sliced Chinese sausage, sliced fried tofu, chopped peanuts and shredded omelette. I believe mine had most of these ingredient and was vegetarian. Octavia quite liked this, which was surprising since she hates fresh salad.

Rojak was something I have never tried or seen before so I was a very excited to try this delicacy. This fruit and vegetable salad dish is popular in both Singapore, Malaysia and Indonesia. This store offered a few different variations of Rojak. I went with the classic, which had pineapple slices, cucumber, Chinese turnip, rose apple, young mango, papaya, guava, torch ginger bud, dough fritters and ground peanuts tossed in their signature Apa Rojak Sauce. It was so delicious a really nice way to add some fruit into my terrible tourist diet. The sauce is a little spicy though, so I was only able to share it with Marco. We both didn’t know what we were eating in every mouthful but we loved it. 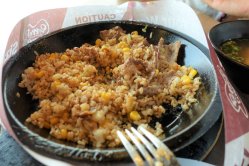 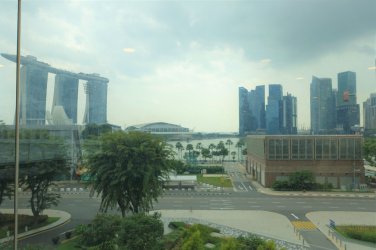 After lunch we head to the beautiful and must see attraction, Gardens by the Bay. In my next post I will share with you my photos and experiences.