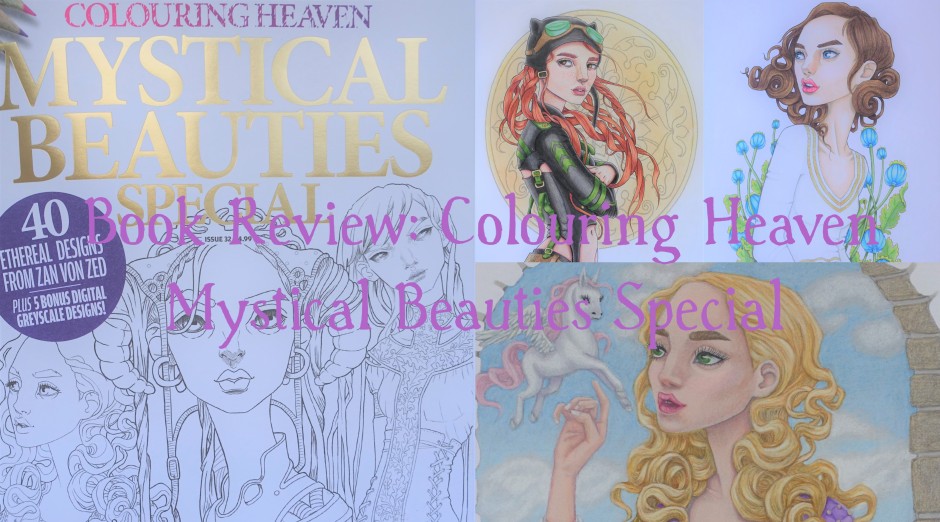 This review today is actually not from a colouring book, but rather an issue from the colouring magazine, Colouring Heaven. I recently discovered that Colouring Heaven is available in Australia from a select retailers. I have actually never purchased a colouring magazine before. I have so many great artist colouring books that I never felt a need. Plus I had no idea Colouring Heaven was available in Australia. However, when I saw that Colouring Heaven was dedicating a special issue to the artist Zan Von Zed, I had to get it. It took a couple of months for this issue to arrive in Australia. So this purchase was only very recent. I have done a little review, coloured a few pictures from it and done a flip through. If your in Australia and interested in this book, I recommend getting out to find out asap, while stocks are still available. If your elsewhere in the world you may be able to still get a copy online (see end of this post).

First I thought I would tell you a bit about Colouring Heaven. This colouring magazine is one of many great magazines by British magazine publisher, Anthem Publishing. They offer a wide range of magazines, such as Vegan Food & Living, Music Tech, Italia!, and Ultimate Dot2Dot. Colouring Heaven is one of their newer editions, which has been running since 2015. Each issue is delivered monthly, offering different themes, and presents 40 images on good quality single sided paper. Previous editions have included themes of fairies, dragons, Halloween and showcased artists such as Kanoko Egusa, Jasmine Beckett-Griffin and Selina Fenech. The issue that I will be reviewing today is Issue 32, which I was able to get in May 2018, however in the UK you can currently order Issue 35. I’m looking forward to upcoming issues dedicated to artists Kanoko Egusa (Menuet de Bonheur), Desti (of Collateral Damage Studios), White Stag (Misfits) and Hannah Lynn (Whimsy Girls).

Zan Von Zed is an multidisciplinary artist, based in Australia. She was originally from Poland and spent much of her youth visiting medieval castles and museums with her art historian parents. Her drawings, paintings and clay work primarily features beautiful strong women with distinctive noses, often wearing elaborate medieval gowns. If your interested in reading the best and only interview with her, see Beautiful Bizarre’s The Royals of Zan Von Zed: Interview or check out her artwork on Instagram.

Zan Von Zed has already illustrated three colouring books that are available on Amazon. These include Ladies of Leisure: A Coloring Quest, Ladies of Leisure II: The Quest Continues and Ladies of Leisure III: This time it’s personal. Each book features 20 greyscale and line art drawings on single sided pages. Flip throughs a of all three books were recently uploaded on the YouTube channel Les coloriages de Gribouilleuse. So if you miss this Colouring Heaven issue, you still have the opportunity to colour some of Zan Von Zed’s amazing art.

The Colouring Heaven Mystical Beauties Special issue, features 40 line art, on single sided paper. There is also a code given in the inside cover of the book that gives you access to 5 greyscale images that you can print at home. Only a few of these drawings are the same design as the line art in the magazine. The majority of the artwork in this issue have been taken from her first and second colouring books and only two from her third colouring book. However, these draws are not all completely the same as some were originally greyscale and were only replicated as line art in the magazines.

When I first looked at a Colouring Heaven magazine I wasn’t impressed with the paper, which is quite thin. However, I bought it anyway because I was already had Zan Von Zed colouring books on my Amazon Wishlist. Once I started colouring in this magazine I was quite surprised how much I enjoyed the paper. Although it is a bright white thin paper, it has quite a nice tooth to it and takes pencils extremely well. It is good thing that the images are on single sided though, because it the pencil does leave some shadowing, so of course markers would bleed through. I doubt that watercolour would work on this paper. I assume that it would become quite wrinkled. That didn’t bother me though, since I prefer to work with coloured pencils and pastels. Just note that this magazine doesn’t offer a title page or a tester page to test your mediums.

Below are I have included a flip through of this magazine issue, which includes the five printed greyscale images and four pictures that I coloured. I have also included all of these completed pictures in this post with some commentary on what I coloured them with and my thoughts.

I choose this more simple (but still utterly gorgeous) picture for my first to colour. It really reminded me of Claire from Outlander, when she first travels through the stones. I was going to put in Stonehenge in the background, but I got a bit lazy. She is beautiful on her own. The flowers are actually poppies, that haven’t opened yet.

For this picture I used only Prismacolor Premier pencils. They blended lovely on this paper, however they did need a lot of layering to get ride of the white specs in the paper. For this reason colouring with these pencils took a little longer then usual. 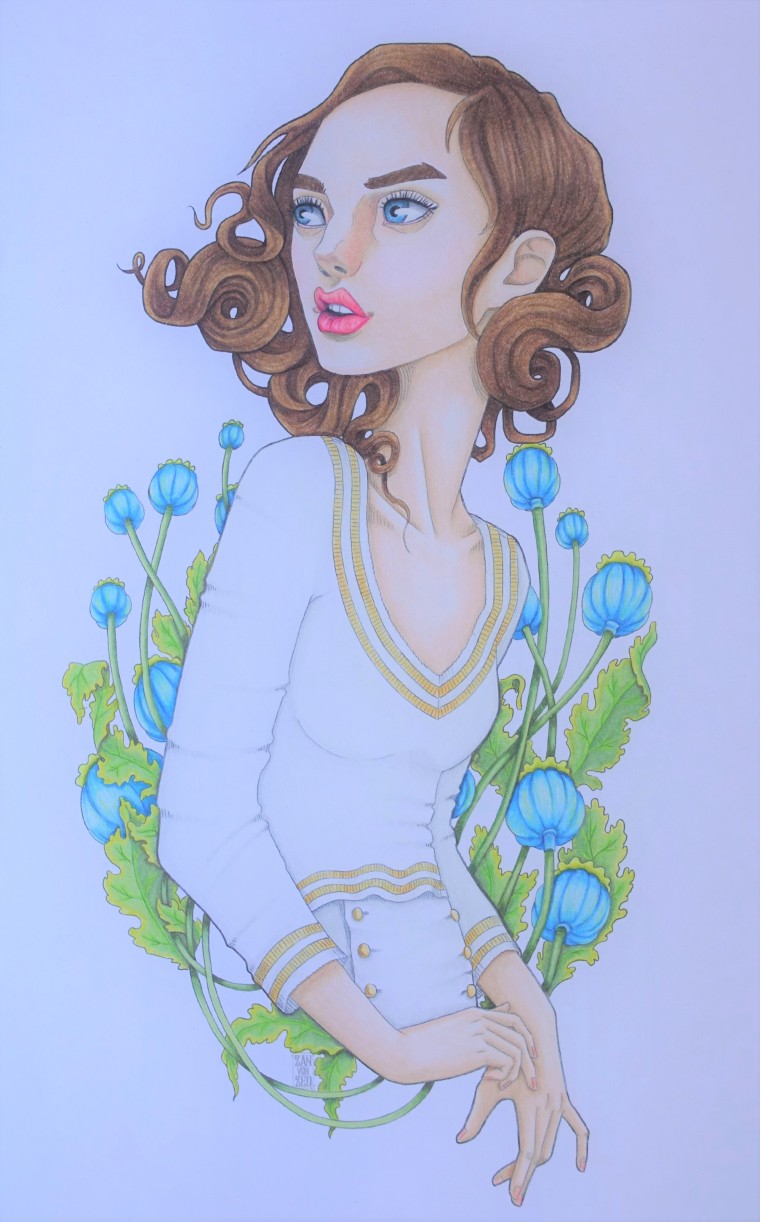 For my second picture I chose one of the greyscale images that were included in the issue to print. This greyscale image was just so gorgeous I couldn’t wait to see it with colour and I am very happy how beautifully she turned out.

I printed this picture on paper from a Derwent Visual Art Diary. This paper is 110 GSM, which is quite nice to colour on. This visual diary is spiral bound so I didn’t do a great job with cutting it. It’s actually the first time I have printed a colouring page, since I prefer physical colouring books. This paper needed quite a bit of layering, but then so did the greyscale. I have never really coloured something this heavily greyscale and these is an art to cover the grey, whilst not loosing the integrity of the sketch. I used Prismacolor Premier pencils for their soft cores and lovely blending abilities. It was took a while, but it was truely a joy to colour.

This next picture was a quick one I did with Mungyo pastels for the background and Faber-Castell Polychromos pencils for the girl. It was so much quicker to complete the the previous pictures because these pencils blended very well on this paper and not many layers were required to cover the white speckling. I did use a white Prismacolor pencil to help blend though. I really liked using these pencils to give a rougher leather look and more define hair strands. She turned out just like I wanted.

This last picture is my least favourite that I coloured. I imaged the girl being in front of a deep brown wooden door, but my execution was terrible. I first used a dark brown pastel for the background. This was not dark enough. I then went over with a couple of different Prismacolor brown pencils and even a colourless blender, but that white specks wouldn’t disappear. I later found it challenging to get the hair and fabric of the dress to look convincing. The amount of layering just took too long for my patience, but I think also my colour choices were a bit off. We can’t always love everything we colour. The only other medium I used was white and silver gel pen for details. 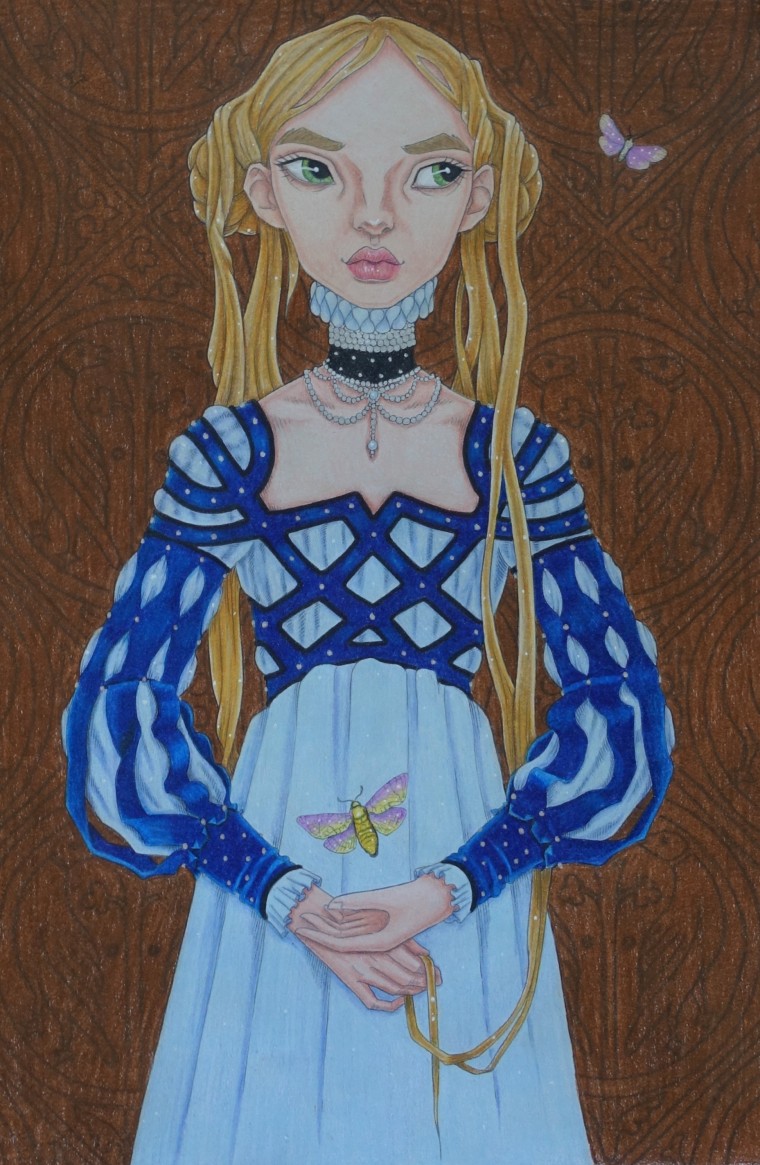